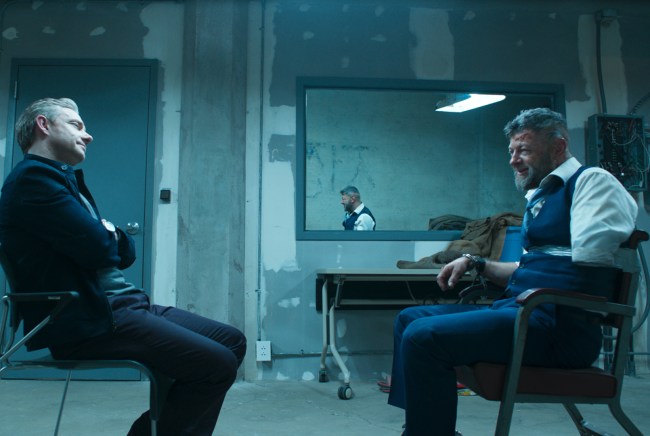 Welcome to our feature series Popcorn History, which will explore the stories behind some of Hollywood’s most iconic films, characters, and stars.

As a result, I spent most of the day rolling out Black Panther content over on the Post-Credit Podcast Twitter account and found such an excellent fun-fact that I simply had to turn it into a full-fledged article.

If you’ve seen Black Panther, then you’ll know the film features a predominantly Black cast, except for the likes of English actors Martin Freeman and Andy Serkis, who played C.I.A. agent Everett K. Ross and Ulysses Klaue, respectively. Freeman and Serkis, both accomplished actors in their own right, are perhaps best known for their contributions to The Hobbit trilogy, as Freeman started as Bilbo Baggins in the prequel films, while Serkis famous starred as Gollum in both The Lord of the Rings and The Hobbit.

As a result of their unique Middle-Earth connection and the fact that they were two of the only white dudes on set, Freeman revealed that the rest of the cast used to affectionately refer to the pair as the “Tolkien White Guys”, in reference to legendary Lord of the Rings scribe J.R.R. Tolkien. Simply elite levels of comedy.

While Serkis’ Klaue was killed by Michael B. Jordan’s Erik Killmonger at the end of the original Black Panther, Freeman is expected to return as Everett Ross for the sequel, Black Panther II, which is currently scheduled to begin production this summer ahead of its July 2022 release date. In fact, most of the original cast is expected to return, with some reports even indicating that Beyonce will join the franchise.

As for the iconic role of T’Challa, Marvel Studios President Kevin Feige has already confirmed that the role heartbreakingly vacated by Boseman will not be recast.

Even without the immense talents of Boseman, Wakanda and the Black Panther franchise are set to remain a major part of the Marvel Cinematic Universe, as director Ryan Coogler is currently developing a Wakanda-based series for Disney+, while some rumors out there indicate that Doctor Doom — one of the most iconic villains in the history of comic books — will make his MCU debut in the 2022 sequel.