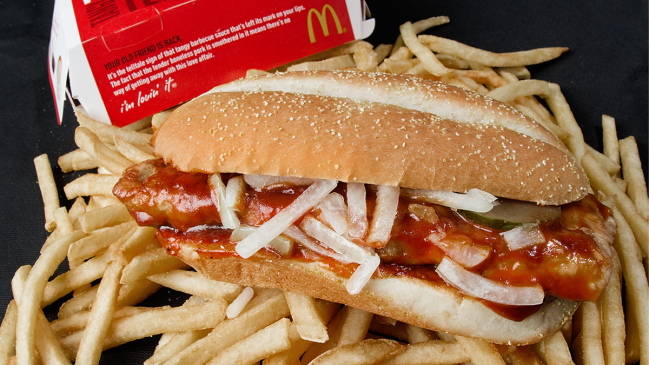 It’s been over 40 years since McDonald’s introduced the world to the McRib, a sandwich consisting of a pork patty slathered in BBQ sauce topped with pickles and onion that made its grand debut in 1981.

Poor sales led to the item disappearing from the menu four years later, but it was resurrected in 1994 and spent a little over a decade hanging around the Mickey D’s lineup in certain regions of the United States before the fast food giant announced its plan to once again send it to its grave following a “Farewell Tour” that was announced in 2005.

However, it only took a couple of years for the McRib to channel its inner Undertaker by popping up out of its casket in 2007 to mark the first of many returns we’ve been treated to since then.

Those revivals have been closely linked with a drop in the price of pork, and it would appear the industry has reached its latest nadir after McDonald’s announced the McRib is returning yet again to close out 2022. However, the news was accompanied by a fairly unexpected development that has plenty of people who love the cult favorite a bit shook.

Signs recently started popping up at McDonald’s locations around the country advertising the McRib “Farewell Tour” that will seemingly bring the sandwich’s time on the menu to a permanent end on November 20th, 2022 based on a blurb on the company’s website. 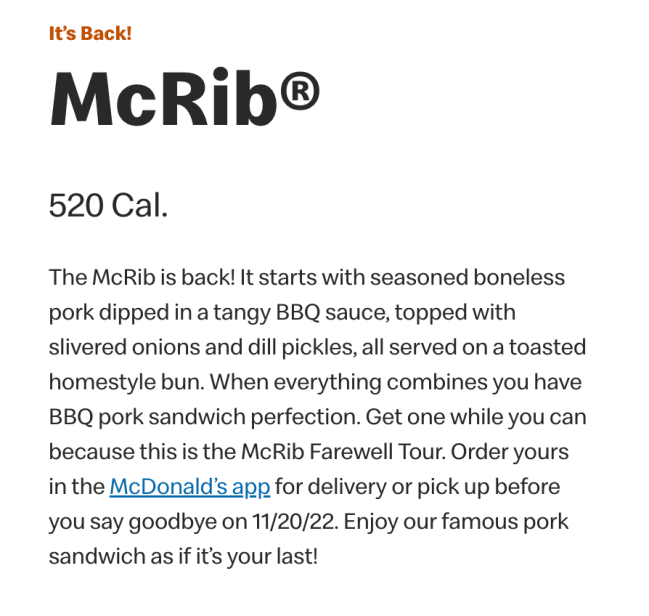 As a result, plenty of people were quick to bid McRIP to the McRib.

The McRib is coming back. According to McDonald’s for one last time. I just thought y’all should know 😭😭

However, others are understandably skeptical that this will actually be the last time we ever see the McRib at McDonald’s when you consider it’s not the first time the brand has used the “Farewell Tour” approach to drum up business.

If you believe this "Farewell Tour" is actually the end of McRib, I have a Mexican Pizza and a Wingstop Chicken Sandwich and Brooklyn Bridge to sell you pic.twitter.com/gCe3yO3kjX

Mark my words – Oct 2022 McDonalds brings back the #McRib but says this is the last time ever, cult chaos ensues, Start of Fall 2023 McDonalds creates a fan campaign to bring it back (maybe even aligning a celeb in the effort), Oct 2023 the McRib is back and sells more than ever. https://t.co/qWWOlcMfBe

McRib FAREWELL TOUR?! Nahhh, I refuse to believe this is my last McRib Season.

However, if the McRib is indeed dead, you have to give credit where credit is due to Pusha T for claiming yet another victim with a freestyle.