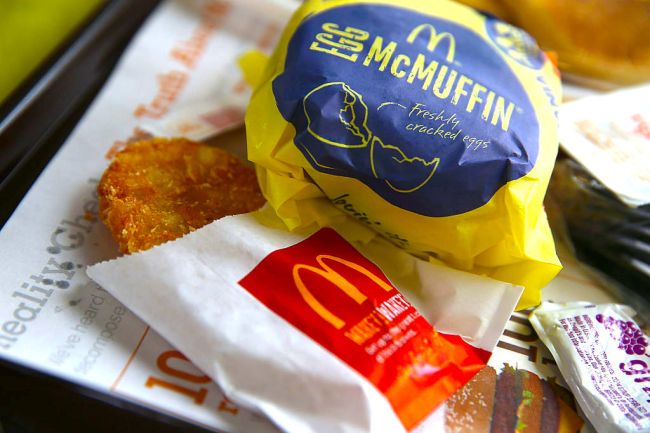 In the 1993 movie Falling Down, Michael Douglas plays a seemingly strait-laced white-collar worker who suddenly snaps while stuck in traffic and proceeds to go on a violent rampage across Los Angeles with the various weapons he acquires along the way. This includes a TEC-9 he upgraded to after attacking a couple of gang members with a bat before deciding to grab a bite to eat at Whammy Burger, a fictional fast food place that might as well have been called “Not McDonald’s.”

After attempting to order breakfast, he’s informed he arrived a couple of minutes after the restaurant switched over to the lunch menu. This development leads to him whipping out the machine gun and inadvertently firing it into the ceiling before ultimately ordering a burger only to be similarly displeased because it looks nothing like the one advertised behind the register.

While I can’t condone the particular methods he employed here (and at plenty of other points in the movie), if you look at the scene in a vacuum, the character is a bit of a folk hero, as his frustration was shared by anyone who’d ever rolled up to McDonald’s in search of a McMuffin and a hashbrown after 10:30 in the morning only for an employee to swat down their request like LeBron James executing a demoralizing chasedown block.

In 2015, the game officially changed when McDonald’s announced it was finally giving us what we’ve wanted for decades by serving breakfast all day long. It was huge news when you consider my go-to order of a sausage, egg, and cheese biscuit is a scientifically-backed hangover cure but I was usually in no state to make a trip to Mickey D’s early enough to secure one.

Sadly, the world suffered an absolutely crushing blow back in March when the chain announced it was temporarily discontinuing All Day Breakfast in light of the pandemic, and now, I regret to inform you it might have permanently fallen victim to the crisis based on a recent report from Food and Wine.

The outlet reached out to McDonald’s about the future of this absolute lifesaver and was greeted with a statement that doesn’t inspire a ton of confidence, as a spokesperson said:

“We removed All Day Breakfast from the menu to simplify operations in our kitchens, which we saw provided better speed of service and order accuracy

As McDonald’s and franchisees evaluate if and how we bring All Day Breakfast back to our menus, we want to ensure these improvements will remain consistent for our customers. Any final decision will be made in partnership with our franchisees, based on consumer demand, and designed to drive the business while minimizing operational disruptions.”

According to Business Insider, individual restaurants have been lobbying to make the change indefinite based on the headaches it’s caused, but based on the number of headaches I’ve had cured with its help, this would be a truly devastating development.