Underage Student Arrested For Trying To Get Into Bar Using A McLovin ID, He’s Grinning Ear-To-Ear In His Mugshot 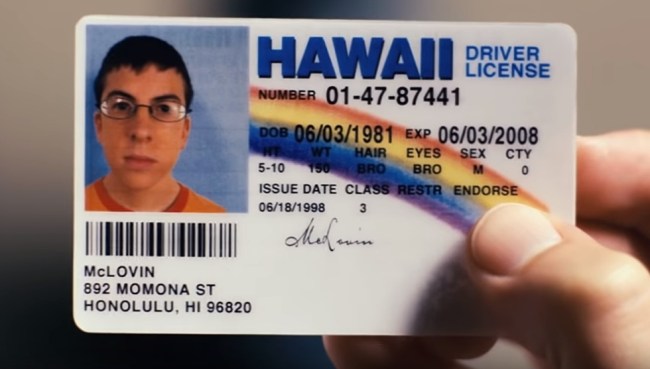 Meet McLovin, the 25-year-old Hawaiian organ donor, who sounds he’s an Irish R&B singer and looks like a future pedophile. According to police, he’s also a 20-year-old student from Iowa who got busted using a fake driver’s license after gaining access to a bar and drinking.

Daniel Alfredo Burleson was arrested on Friday, October 11, 2019, around 12:30 AM, after cops noticed that he was using a phony identification card. Police officers approached the underage man at the Airliner Bar in Iowa City, who “had an alcoholic drink in his hand.” Life imitating art.

The officers asked the man for his ID, and “police could see the def’s fake Hawaii ID with the name ‘McLovin,’” according to The Smoking Gun. The Hawaiian driver’s license showed a date of birth of June 3, 1981.

Police ran the license and found that he was not “McLovin,” but actually Daniel Alfredo Burleson, a 20-year-old from Des Moines. McLovin, err Daniel, was having a good time at the bar before being arrested, he had been enjoying “a mixed drink containing vodka.” No word on whether it was Goldslick Vodka, the one with all the little golden flakes in it.

The police said that the Fogel IRL “smelled strongly of ingested alcohol and had slurred speech and bloodshot watery eyes.” Burleson was charged with possession of a fake ID and public intoxication, both misdemeanors. He was also cited for minor in possession of alcohol and being in a bar while underage.

Burleson got a ride in a police cruiser, but he was handcuffed and taken to jail instead of getting drunk, blasting Van Halen’s Panama while doing donuts, throwing Molotov cocktails, and firing off rounds like Fogell in Superbad. Free McLovin.

Burleson informed the police that he got the fake ID off of Amazon.

Burleson was taken to Johnson County Jail and then released the next morning. He is scheduled to appear for a preliminary hearing on the possession of a fictitious ID charge on October 21.

In Burleson’s grinning mugshot, he is enjoying his arrest more than anybody.

This man did nothing wrong. https://t.co/mbMr0dAPsH

Seth and Evan were absolutely correct about everything they said about the McLovin fake ID. Also, he should have used the name “Muhammad,” the most commonly used name on Earth. Read a f*cking book for once.