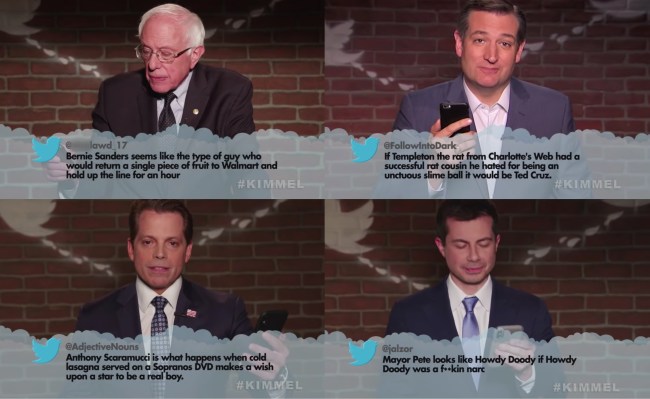 I figured since this entire election has felt like a Middle School election I’d start this article the same way as a 12-year-old would write an essay, by hitting you guys with a pointless question and a random definition of a world you already know just to hit that glorious word count, not too dissimilar from when Michael Scott defined ‘marriage’ during his wedding speech for Phyllis and Bob Vance, so…. You know what a lot of people can use right now? Some good old fashioned catharsis.

Catharsis: (n.) a. “the process of releasing, and thereby providing relief from, strong or repressed emotions” b. “purification of the emotions (such as pity and fear) primarily through art.”

What we have here are some of the country’s most popular politicians on both sides of the aisle getting completely demolished by Twitter trolls while reading Mean Tweets for Jimmy Kimmel Live. This clip has appearances from Bernie Sanders, Elizabeth Warren, Ted Cruz, Andrew Yang, Anthony Scaramucci, Nancy Pelosi, Cory Booker, John Kerry, Al Franken, John Kasich, Pete Buttigieg, Adam Schiff, and Mike Bloomberg.

You might support some of these politicians and hate others. It’s possible you despise all of them. But what we can all agree on is seeing these politicians who we’ve been forced to pay attention to for years getting destroyed by trolls is deeply satisfying.

I wish they’d just fire up videos like this throughout the halls of every government building in Washington D.C. so these politicians who take themselves more seriously than anyone on the planet could begin to find some humility and see what John Smith thinks about them. You KNOW they don’t read the replies on Twitter. More often than not they don’t even run their own Twitter accounts.

We need to forcibly roast these politicians from time to time and burst their bubbles. Maybe that should be a national holiday as well. Make it a 24-hour marathon every year with Senators and Congressmen chosen at random (by lottery) to sit in a chair for 30 minutes at a time and get roasted by the public.