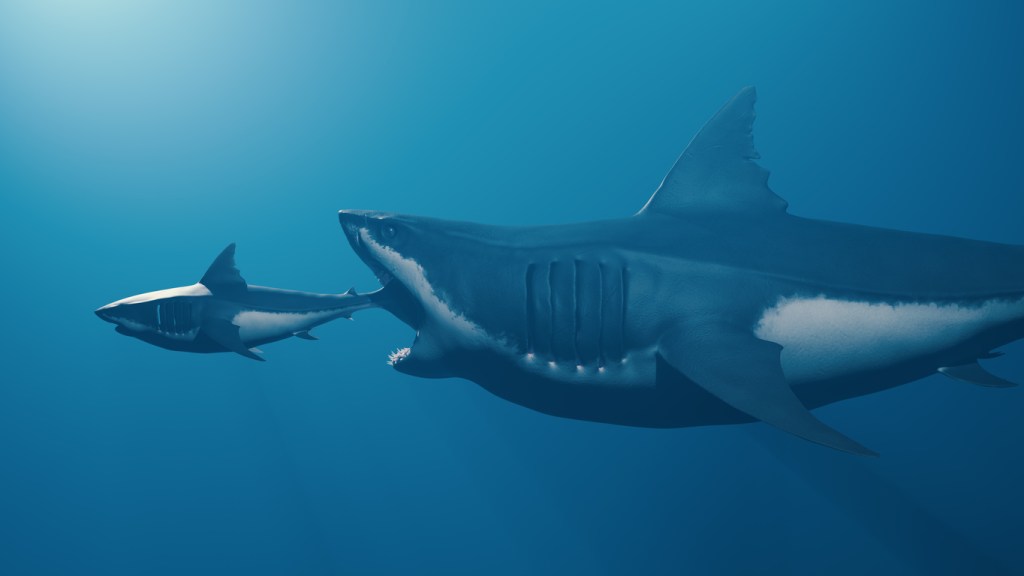 Most of what we really know about the megalodon starts and ends with how big their teeth were. Fossil hunters regularly find massive megalodon teeth and from this, paleontologists are able to extrapolate a lot about the largest shark that ever existed. We also know they existed between 23 and 2.6 million years ago.

But we don’t really have a great sense of what the megalodon looked like, what it ate, how much it ate, and how fast it swam. At least, until now. A recent futuristic study using 3D mapping gives us the most complete view of The Meg the world has ever seen.

Scientists have always know the megalodon was enormous but it’s never been clear just how big they were until this recent study. The video below breaks down the study excellently and how scientists recreated a megalodon using 3D modeling and were able to use that to infer other things about the largest shark ever. Here’s the video with more on it below.

New Futuristic Megalodon Study Reveals How Voracious Of Predators They Were

Some incredible facts about the largest shark to ever exist.

The megalodon has always been known as the biggest shark that ever lived. But that means more now that scientists were able to actually create a 3D rendering of it.

Using ‘tooth measures and comparisons with other analogous shark species’, scientists have been able to determine that Megs grew up to 20 meters or 65.6 feet in length. Fully grown blue whales are around 79 feet long, as a point of comparison.

So, how this latest study came about is the fossil record of a megalodon that ended up in a sea that would later become modern-day Belgium had a well-preserved set of vertebrae. 141 vertebrae to be exact. Somehow, these vertebrae went over a century without being studied in detail.

It wasn’t until the 1990s the 141 vertebrae were identified as part of a megalodon. Flash forward to 2019, and an international group of scientists revisited these vertebrae and used them to map out what the spine of a megalodon actually looked like.

They used 3-D scans of the fossils to reconstruct the spinal column. Then they recreated the megalodon skull using the 3D scans of a great white shark but scaled to fit the teeth of a megalodon. The final step was to create a 3D rendering of the Meg’s body based on scans from great whites. Once they added 3D ‘flesh’ to the model it really began to take shape.

A Full 3D Model Of A Megalodon Shark

‘Scientists created a 3D model of an extinct shark, big deal!’ Right? Wrong. Once they were able to get a reliable 3D model of the megalodon using vertebrae and teeth, they were then able to calculate the center of mass, volume, and surface area of the shark.

According to that video above, from those measurements the scientists were able to determine the ‘swim speed, stomach volume, and daily energy requirements’ of the largest shark to have ever lived. All of this was based on living sharks/ancestors of the megalodon. So it’s not an exact science by any means but it’s a closer depiction of the megalodon than ever before.

What did they learn about the Megalodon model?

Combining the existing teeth of megalodons and this new 3D model, they determined these sharks had stomachs that were nearly 10,000 liters in volume and were capable of eating a whole prey as big as 8 meters or 26 feet in length.

They further estimated these sharks would have needed to eat around 98,000 calories per day to sustain their massive size. This also meant they’d need to eat high-caloric creatures like marine mammals (seals, whales, etc). It was also determined that eating creatures with calorie-rich flesh would’ve allowed the megalodons to go up to 2 months without eating, assuming they were eating calorie-rich whales when they got the chance.

Based on the 3D model and existing sharks, they determined the megalodon has “an average cruising speed of 1.3 to 1.4 meters per second,” or 4.2 to 4.6 feet per second. This means it would’ve been able to swim all around the planet for months on end without feeding as it traveled from feeding ground to feeding ground in search of the easiest and most caloric meals.

One of the many interesting details pointed out in this video is megalodons would’ve actually been delivering nutrients all over the planet. Say that it eats a whale near modern-day Florida and then swims to modern-day South Africa, it would’ve been dropping nutrient-rich poop along the way and often times in areas that wouldn’t have otherwise had those nutrients.

I came across this video in an article on Physorg that also has an interesting discussion on the bite force of the megalodon. Check that out here if you’re interested in learning more.

Eat or be eaten https://t.co/g7E7PmeBnp