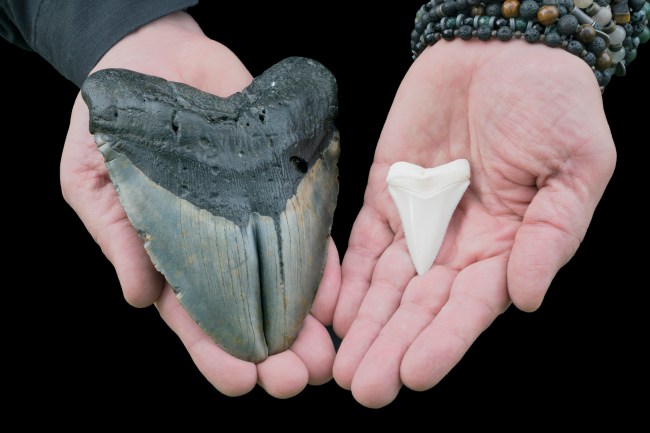 I actually published this article about cannibal megalodon sharks back in October but for reasons unbeknownst to me every mainstream news organization on the planet seems to have just caught wind of the bloodlust. So, I’m running it again because why not? I’m sure a few of you missed it the first time. And who doesn’t want to hear about cannibal sharks???

The Megalodon shark (Otodus megalodon) aka ‘Meg’ was the largest shark to ever inhabit the oceans. Recent studies have found that megalodons were actually nearly 2x longer than any shark that isn’t a ‘filter feeder’ and Megs measured up to 46-feet-long (14 meters). To give you some context, those two teeth you see above are a Megalodon tooth on the left and Great White tooth on the right. That’s how much bigger the Meg was than Great White sharks.

You can hop on a thousand different websites right now and purchase a megalodon tooth for yourself. You can go on various diving tours in places like North Carolina to search for these teeth yourself. The megalodon tooth is MASSIVE and we’ve known this forever but scientists have never really had a reason for why these sharks are so big because they’ve been extinct for so long.

A study published on October 5th in the Historical Biology journal sought to shed some light on the relationship between gigantism and sharks by using the shapes and sizes of ‘ancient shark teeth’ to estimate body sizes. A single shark can lose ‘tens of thousands’ of teeth throughout the course of its lifetime and this means there were a lot of teeth out there for a study of this nature:

Shimada and his colleagues found that the height of megalodon’s tooth crowns was an extreme outlier among their data, suggesting a total body length of at least 14 meters, twice as long as any other shark that isn’t a filter feeder. But four other extinct species of lamniforms exhibited “gigantism,” growing to over six meters long — not megalodon-scale, but still quite large, Shimada says. Gigantism also occurs in several modern species, including great white, mako and thresher sharks.

The study “gives a broad overview on the relationships between tooth, jaw and body size in an important number of lamniform fossil lineages,” says Humberto Férron, a paleobiologist at the University of Bristol in England. (via ScienceNews.org)

That last portion is important here because while they were able to learn about the relationship between a shark’s teeth and its body size they were also able to dive deeper into the underlying characteristics of the various species. For instance, the megalodon was a warm-blooded species which enabled them to swim faster and catch more prey.

This might be one factor in explaining why they were so big but it wasn’t enough:

But Shimada and colleagues felt that explanation was incomplete, because it didn’t address why this group of sharks in particular might have developed the endothermy that led to gigantism. So, in the new study, the team suggests that a behavior unique to this order may also play a role — a kind of cannibalism that occurs in the womb. (via ScienceNews.org)

So here’s where things go off the rails a bit. What they discovered is the megalodon’s cannibalistic behavior in the womb could be the leading cause of why they were so massive. These warm-blooded sharks were born by ‘live birth’ and the first one to hatch in the womb would then eat all of its brother and sister sharks and by the time it was born it was already big and hungry.

Here’s the explanation from ScienceNews.org on this new theory:

Sharks in general have a reproductive strategy known as ovoviviparity: The embryos develop inside eggs that stay inside their mothers until they are ready to hatch. But ovoviviparity turns extreme among all lamniform sharks — from the fierce predators to the gentle filter-feeders. The first shark pup to hatch inside the mother proceeds to eat the rest of the eggs, a behavior called intrauterine cannibalism. By the time the pup emerges from its mother, it’s already quite large and ready to defend itself against predators.

That behavior, combined with the right environmental conditions such as favorable water temperatures and the availability of food, may give some lamniforms the green light to grow gigantic, the researchers say.

It’s an interesting, out-of-the-box idea, says Stephen Godfrey, a paleontologist at Calvert Marine Museum in Solomons, Md. It’s possible that intrauterine cannibalism is linked to some lamniforms becoming warm-blooded in the first place, he says. It could help these sharks grow big enough to take on bigger prey — and, in turn, require more energy, such as that provided by an evolutionary adaptation like warm-bloodedness, to maintain such an active lifestyle.

It seems incredibly unlikely that scientists would ever be able to point to one specific factor and say ‘yup, that’s it, that’s why they got so big.’ In that approach you’d just be stuck on a never-ending cycle of research to discover why X caused Y and then what caused X and what caused that, etc. etc. Always going deeper.

The true explanation of why they were so big would involve multiple factors but this latest publication about carnivorous behavior in the womb certainly appears to be a large contributing factor.

To read more on this, you can head on over to ScienceNews.org.