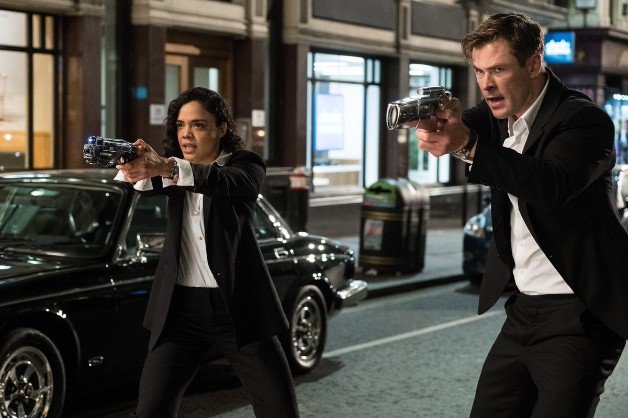 The first trailer for Men in Black International is here and there’s a lot of aliens which is to be expected, but there is also unexpected things like no Will Smith, no Tommy Lee, a Thor reunion, England, and Fergie’s 2006 pop anthem London Bridge. The next chapter of Men in Black goes to London where new MiB agents Chris Hemsworth and Tessa Thompson are gunning down aliens.

Hemsworth and Thompson, who both starred in Thor Ragnarok, are now MiB Agents H & M. Is this some sort of desperate marketing method of selling discount department store clothes? Chris even delivers a hammer joke in the middle of battling an extraterrestrial creature.

So I guess Thor and Valkyrie are doing their own thing now? #MIBInternational pic.twitter.com/MKkbk4ttWK

The new movie also stars Liam Neeson, Kumail Nanjiani, Rebecca Ferguson, and Emma Thompson. The film is directed by F. Gary Gray who is best known for Straight Outta Compton, The Italian Job, The Negotiator, and Friday. Coincidentally, he directed the music video for Will Smith’s 1999 song La Fiesta.

Stop me if you’ve heard this before, an accomplished alien-fighting agent must show the ropes to a new hotshot alien-fighting with a very particular set of skills all while keeping the organization a secret. Kind of sounds like the first Men in Black. But this time they’re in London.

The Men in Black franchise has made $1,683,771,827 at the worldwide box office. Men in Black International rockets into theaters on June 14.