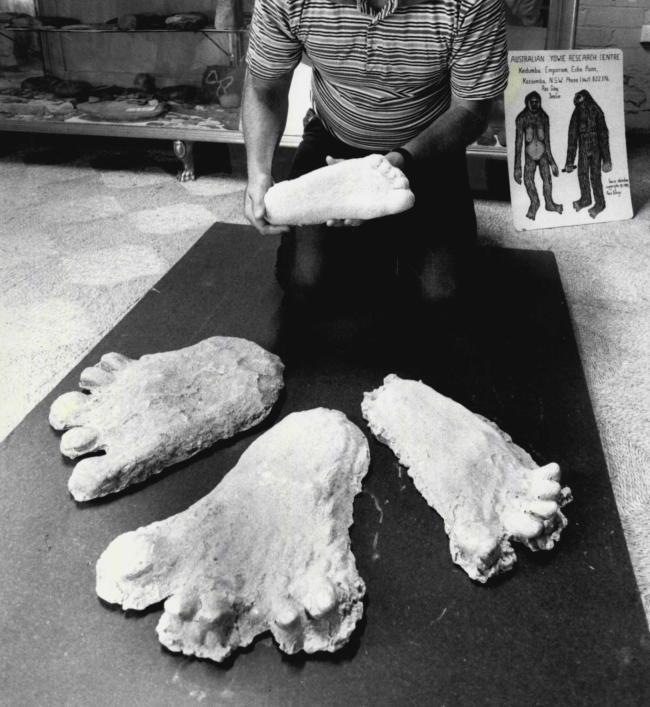 According to the description on the photo above, taken on January 14, 1987, “Australia has its own version of bigfoot roaming the isolated mountain forests of NSW, according to dedicated yowie-hunters. They claim that the virtually inaccessible forests and gullies of our most rugged regions are hiding the last survivors of a race of large, ape-like, hairy creatures. But the Australian yowie, said to be a 210-240 cm tall erectile vegetarian primate, is proving as elusive as his northern hemisphere cousins. No skeletons, or even a strand of hair, have been found which could be put forward as conclusive proof of its existence. Yet believers point to plaster casts of footprints, Aboriginal cave drawings of an ape-like creature and sightings by campers in remote areas to fuel their hopes of finding a yowie, alive or dead.”

On December 4, 2021, three men making their way home from their jobs working on a plantation on the Sunshine Coast got some “conclusive proof of its existence.” At least that what they are claiming.

The three men from remote Queensland, Australia recently told the Courier-Mail that they were driving back to the Jimna Base Camp when they noticed a “slouched over figure” loitering under a street light.

Upon approaching the figure, the men say it turned in their direction before running off. They described it as having “very long arms” and “an apelike” face and shape covered with dark reddish hair.

“We initially thought it was a boar or a really big animal until we got closer and saw it run off in a very apelike way,” said Seamus FitzGerald, one of the workers.

“I’ve never really had a paranormal or strange experience like that before. I hardly slept that night and the feeling was overwhelming that I had seen something that I never believed in previously.”

Stirling Slocock-Bennett, one of the other men who witnessed the encounter said, “We were in utter disbelief of what we were seeing. It definitely was a scary moment for me, as I said I was so confused and shook of what we were seeing, and as we got closer and closer it didn’t make sense like you’d hope.”

Slocock-Bennett said that after speaking with people from the area that he learned “the yowies are pushed out in storms.”

This encounter isn’t the only bizarre one to have been reported in Australia recently.

Last month, a fisherman claimed that he had been stalked by a “dog man” in the Australian outback while kayaking.

The fisherman told the Believe: Paranormal & UFO Podcast that he “thought he was going to be killed” by the creature.

“I noticed that every time I took a stroke with the paddle of my kayak, whatever this thing was, it was taking a stride to each paddle I was taking,” he said.

The man says he was “petrified for probably a month” of returning to the area, but he eventually did, only to encounter the creature again.

“As it was running, it was smashing trees out of the way,” he said.

“I don’t know if they were breaking or it was hitting them, you couldn’t see what the bush was like because it was so thick.”

“I’d never heard anything like it in my life,” he added. “It would roar, and then it would take a breath in, but then the breath it was taking was actually louder than the roar it was doing.

“This creature just went to another level and it was crazy. I could hear in my head something saying, ‘go now or you’ll die’. It wasn’t my own voice, my own consciousness, it was something else.”

Usually, the dogman is reported as being seen in Michigan here in the United States with the most famous sighting being captured in the infamous Gable Film.