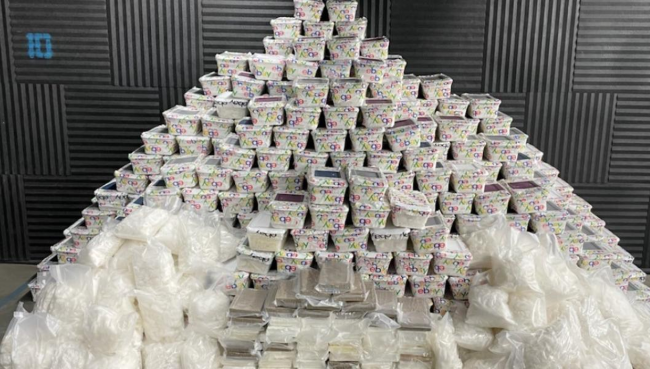 Along with the Southwest Border Initiative (SWB) Group 2 and the Fontana Police Department, the Los Angeles Division of the DEA seized approximately 3,552 pounds of methamphetamine and 66 kilograms of cocaine in Norco, California.

“Investigators had been investigating a cocaine and methamphetamine drug trafficking organization believed to be linked to the Sinaloa Cartel,” read a press release about the bust which labeled it “historic.”

“During the investigation, DEA agents and Task Force Officers, with assistance from detectives with the Fontana Police Department, identified a local house in Norco, California where drugs were being stored.

“In late September 2022, investigators observed an individual carry out three weighted boxes from the residence and put them in a vehicle.

“A search of the vehicle resulted in the seizure of 66 kilograms of cocaine and an additional seizure of approximately 3,552 pounds of methamphetamine from numerous boxes located in the garage of the residence. The total seized drugs have an estimated street value of $33 million dollars.”

According to the DEA, the greater Los Angeles area is a major transshipment hub for illegal drugs coming from the southwest border. Bulk shipments of drugs such as this are usually broken down into smaller amounts for distribution to dealers both locally as well as in other states.

The DEA says the Los Angeles area’s many international airports, freeways, and bus and train lines are used to smuggle shipments of drugs to other locations around the country.

“Synthetic drugs like methamphetamine are highly addictive, dangerous and killing people at alarming rates,” said DEA Los Angeles Special Agent in Charge Bill Bodner. “This massive seizure likely saved lives and prevented the Sinaloa Cartel from doing business and profiting on the lives of people in our communities.”

Back in April, over $35 million worth of meth was found hidden inside strawberry purée and seized at the Mexican border.

Three days later, Customs and Border Protection officers at the Tecate Port of Entry in California more than 400 pounds of methamphetamine, cocaine and heroin concealed inside toolboxes being transported in a 2006 Toyota Tundra.