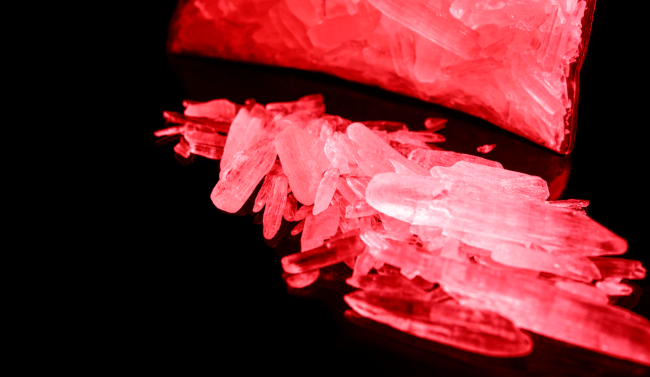 Officers with the U.S. Customs and Border Protection, Office of Field Operations (OFO) at the Laredo Port of Entry in Texas recently made a whopper of a methamphetamine seizure.

More than $35 million in meth was discovered inside a commercial truck arriving from Mexico at the World Trade Bridge in Laredo on April 12.

Remember in Breaking Bad how Gus Fring’s crew would hide their meth inside buckets of fat batter then ship it to their dealers using his Los Pollos Hermanos trucks? This was kind of like that only with strawberry purée.

“After conducting a thorough secondary examination, which included utilization of non-intrusive inspection (NII) equipment, CBP officers discovered 158 packages containing a total of nearly 1,761 pounds (798.88 kg) of alleged methamphetamine concealed within the shipment,” read a CBP press release. “The methamphetamine had an estimated street value of more than $35.2 million.”

“This mammoth seizure of methamphetamine underscores the reality of the drug threat we face at the port of entry and the determination of our frontline officers to apply the latest inspections technology coupled with officer experience to keep our border secure,” said Port Director Albert Flores, Laredo Port of Entry.

Using strawberry purée is just one of the many ways smugglers try to get drugs into the U.S.

Three days later, Customs and Border Protection officers at the Tecate Port of Entry in California more than 400 pounds of methamphetamine, cocaine and heroin concealed inside toolboxes being transported in a 2006 Toyota Tundra.

“During the inspection, CBP officers discovered and extracted a total of 94 packages of narcotics from underneath and inside multiple toolboxes on the bed of the vehicle,” CBP stated in a press release. “The narcotics were tested and identified as cocaine, methamphetamine, and heroin with a combined weight of approximately 415.61 pounds.”

California CBP officers discovered 400+lbs of methamphetamine, cocaine and heroin concealed in toolboxes destined for the US. The narcotics were concealed in 94 packages underneath and inside the bed of the vehicle.

The seized drugs had an estimated street value of $2.56 million.