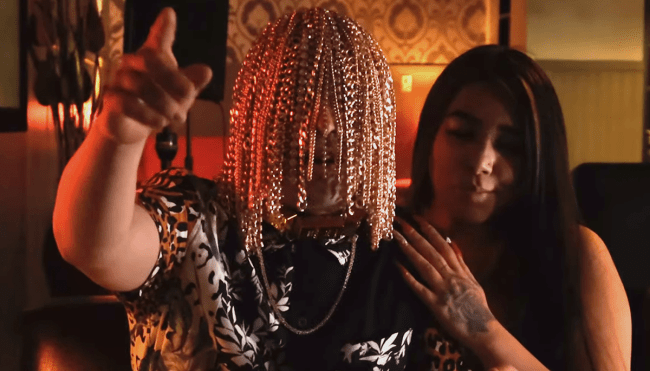 Back in February, Lil Uzi Vert unveiled one of the wildest flexes you’ll ever encounter when he announced he’d teamed up with a jeweler in New York City and engineered a way to have a pink diamond purportedly worth $24 million permanently implanted into the middle of his forehead.

Anyone who heard that news and asked “What could possibly go wrong?” got an answer a few days later after the rapper shared a photo of blood leaking out of his wildly expensive piece of flair, and he recently revealed he suffered another setback in July when fans at Rolling Loud ripped the diamond out of his forehead while he was crowd surfing.

However, I would argue Lil Uzi Vert has nothing on another rapper who took a similar plunge shortly after he did, as The New York Post recently called attention to a 23-year-old reggaeton artist named Dan Sur who’s spent the bulk of 2021 walking around with dozens of gold chains hanging from his head after having the hooks they dangle from surgically implanted in his scalp in the spring.

It’s unclear how much the jewelry that serves as Dan Sur’s de facto braids is worth, but the stunt turned out to be a pretty good business decision when you consider the Mexican rapper currently sports almost two million followers on TikTok after his videos experienced a noticeable spike in popularity in the wake of the procedure.

The rapper had a habit of flexing on social media prior to his wild transformation, but he’s basically unrecognizable when you compare his current look to his previous one (which is mostly because he wears his gold hair the same way Sia wears her wigs).

I’m sure there’s no way he’ll end up regretting this move.