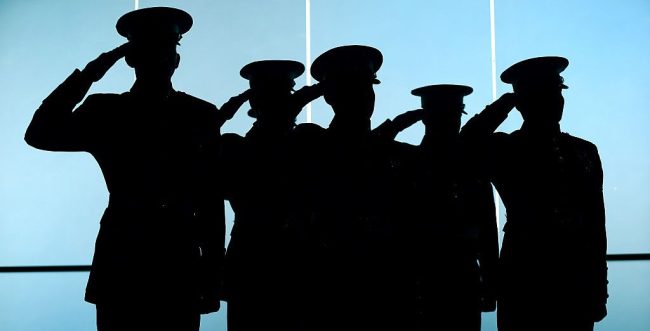 There are moments as a father and son that stand out, and there are moments in life that stand out. When both of those parallels cross paths, it makes for an emotional journey. That intersection reached its pinnacle when Master Sergeant Michael Fisher presented his son with his first salute as a Second Lieutenant in the Marine Corps.

Being promoted in the military is an honorable time for anyone, but this ceremony was incredibly special for the Fisher family. Sgt. Fisher stood tall and proud as he reminded his son what a joy it has been to watch him grow up to become the man in front of him. As the speech goes on, his voice begins to crack and he has to hold back from tears. It was at that point when the waterworks began for me, as I couldn’t help but to cry.

Master Sgt. Michael Fisher gave his son his first salute upon commissioning as a second lieutenant, and the incredible moment will bring you to tears. 👏 pic.twitter.com/O0t0E31OpQ

The video, originally posted on TikTok, has been viewed more than four million times, in addition to being posted on other outlets. Even the most cold-hearted of people can’t help but get a little teary-eyed.

“I’ve watched you grow and mature and become the man that you are today,” Fisher said to his son standing before him. “You have always been respectful by saying ‘Yes, sir.’ ‘No, sir.’ ‘Yes, ma’am.’ And ‘No, ma’am.’ A salute is a sign of respect. It is a privilege to render you your first salute.”

He raised his hand to salute his son and, with his voice quivering, added “But it is a great honor to say ‘Congratulations, sir, on your commissioning.”

Master Sgt. Fisher is an instructor with the Marine Corps Junior ROTC Program, a position that is a non-commissioned officer. His son, who is now a Second Lieutenant, will serve in a commissioned post. Thus, the moment is even more profound, as the elder Fisher is passing the torch to his son, who will go on to serve in a higher ranking.

No matter what the post positions are, the heartwarming video is everything great about family, military and the internet. Congratulations, Second Lieutenant, on your commissioning. And congratulations Master Sergeant, on raising a son who you have raised well. We are grateful for your allowance to be a part of your moment.