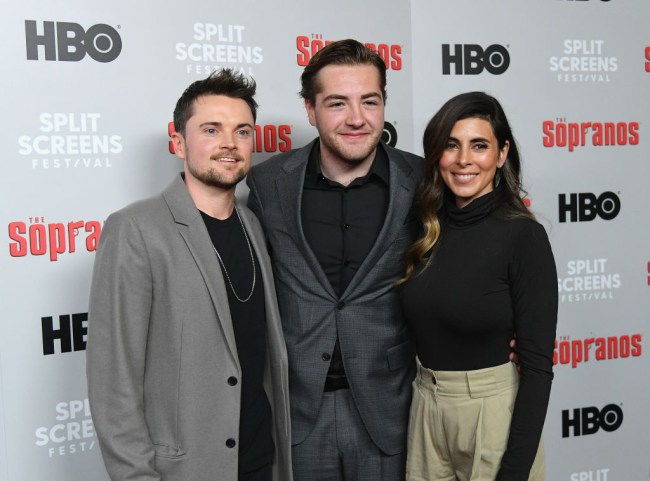 Michael Gandolfini will play a young Tony Soprano, which is the character that his father James Gandolfini made enormously popular in the HBO series The Sopranos. Michael wrapped up production of The Many Saints of Newark this week and he paid tribute to his actor father on the anniversary of his tragic death.

The 6-year anniversary of James Gandolfini’s death happened on June 19. His son, Michael Gandolfini, was only 13-years-old when his father died in Rome, Italy, at the young age of 51. Michael was in eighth grade when he found his father collapsed in a hotel bathroom in Italy. James Gandolfini apparently died from a heart attack in Rome.

Now, the 19-year-old Michael Gandolfini replaces his father as a younger Tony Soprano in the upcoming movie. Michael plays Tony Soprano, but before he became the New Jersey Mafia boss and is dealing with race riots in Newark in the 1960s.

This is Michael Gandolfini playing young Tony Soprano in “The Many Saints of Newark.” Certainly looks like his dad. Man, I hope this movie doesn’t stink. pic.twitter.com/TaBE9T8R7i

Production for The Many Saints of Newark, The Sopranos prequel film co-written and produced by series creator David Chase, ended this week. Michael Gandolfini paid tribute to his famous father.

New images of Michael Gandolfini and Jon Bernthal on the set of 'THE MANY SAINTS OF NEWARK' via @DailyMail pic.twitter.com/Sv9Gz2giYi

6 years is too long. Every year without you is. But I know you’re around. Miss you. More than anything. In this particular second it’s your laugh that I miss most. I love you so so much. We celebrate you today. Working hard to make you proud, I know you are, but I’ll never stop working at it. Love you dad.

A week ago, The Walking Dead star Jon Bernthal gave an update about The Many Saints of Newark.

Bernthal said he “loved” Michael and called him a “beautiful young man, who this obviously means an unbelievable amount to and I think he sort of approaches with the highest level of integrity in honoring the show and his father. He did this the right way, he really, really worked hard and people are gonna dig what he did. I think he’s gonna be a friend of mine for life.”

Here is a video from the set fo The Many Saints of Newark in Paterson, New Jersey.

The Many Saints of Newark is expected to be released in September of 2020.