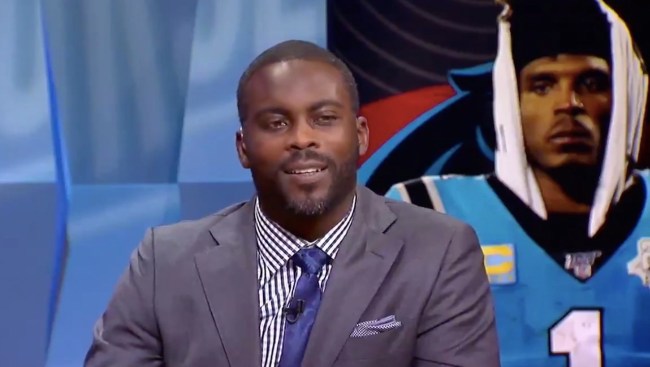 Just years removed from being one of the most dominant players in the National Football League, Carolina Panthers quarterback Cam Newton finds himself at a precarious crossroads as people begin to wonder if his career is at the beginning of the end.

Naturally, given his frankly awful start to the season, pundits and analysts across all of the major sports networks have been quick to criticize the former MVP, including FS1’s Mike Vick, who took particular issue with Cam’s increasingly preposterous outfit choices.

Appearing on FS1’s Speak For Yourself, Vick said that Cam needs to take a “different approach” to his fashion because “this is football” and “not a fashion show.”

“I didn’t like it. I mean, look, you’ve got everybody watching you, Cam, including your teammates. You know, this is not a fashion show — this is football.

Throw the suit on, the hats was [sic] cool, got away with that. I respect Cam for what he do [sic] as a football player, I respect him cause he loves fashion, but it’s a different demeanor, a different approach you got to take as far as your appearance and everything, man. Everything plays a factor.”

Look, I’m all for redemption and serving your time and second chances and yada yada yada, but for MIKE VICK — of all people — to criticize Cam Newton for focusing on things other than football, it raises eyebrows.

Personally, I’d prefer my quarterback to dress like a clown inside the locker room than to act like an animal-murdering monster outside of the locker room.

.@MichaelVick says he isn’t a fan of Cam Newton's fashion in the locker room

"This isn’t a fashion show. This is football." pic.twitter.com/2S9TiVUF6D