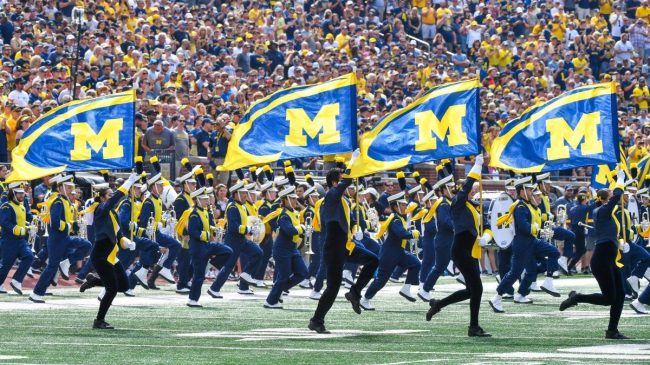 The Michigan Wolverines are the fourth-ranked team in the country according to both the USA Today Coaches Poll and the AP Poll.

But you wouldn’t know that from their first-half showing against the Maryland Terrapins on Saturday. The Wolverines entered the contest as a 17.5-point favorite according to DraftKings Sportsbook.

Things looked great for the hosts early on. Michigan took a 7-0 lead less than 10 seconds into the game after a hilariously boneheaded play by the Terrapins on the game’s opening kick.

From that point on, however, Maryland took control. The Terrapins outscored the Wolverines 13-3 and led 13-10 just prior to half.

Wolverines fans were, understandably, not very happy with the performance.

One fan was ready to call it a season, saying “this is turning into an absolute nightmare scenario. I mean our season’s over if we lose right?”

Message board user blue55 said “We could legit lose this game, unreal. I thought we were legit. They even gift wrapped a TD. Our defense stinks with the loss of hutch and Ojabo as predicted.”

🚨MELTDOWN ALERT 🚨#Michigan is down 3 in the second quarter. #MeltdownAlert pic.twitter.com/jvWg7b6GBk

The hits kept on coming as well.

Star running back Blake Corum took a 4th-and-1 carry 33 yards for a touchdown with 22 seconds left in the half and the Wolverines actually went into the break with a 17-13 advantage.

They’re not catching him! pic.twitter.com/lOvCsvj7MQ