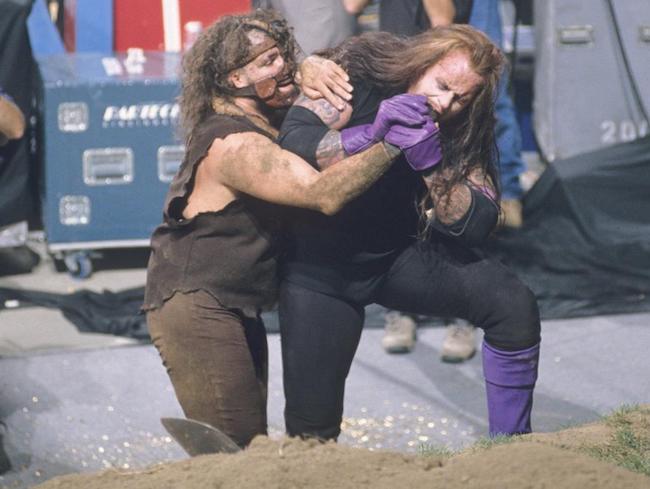 The sight of The Undertaker tossing a lifeless opponent into a casket is burned into the memory of millions of wrestling fans.

I still remember the first time I witnessed Taker lock the Ultimate Warrior in a casket during a segment of “The Brother Love Show.” That moment haunted my dreams for weeks. It didn’t help that I witnessed the moment on a Sunday afternoon and went to a viewing that night.

For some performers, crawling into a casket is no big deal, but Mick Foley hated every minute of the experiences.

In an interview at an Inside the Ropes, Foley discussed facing the Undertaker in casket matches leading up to their Buried Alive match “In Your House 11″ in 1996, and how the boys mercilessly ribbed Foley after every match by leaving him locked in the casket.

Foley’s dream suddenly became a nightmare when every match ended with him inside the casket.

And I’m being rolled to the back and hand slamming on the casket, and every night without fail, I’d scream for someone to let me out. And every night they would keep me in for an additional five minutes as a rib.

And then the next night I’d go ‘Don’t you dare keep me shut in that casket again!’ Every night they’d assure me they wouldn’t, and every night they did.”

The casket matches eventually lead to the Buried Alive match at “In Your House.”

Foley told the Inside The Ropes crew the work that went into making it appear as though he’d been buried in the ground.

“I’m thinking ‘How are in the world are we gonna pull this off?’ And I get there – Richie Posner, we called him the ‘Magic Man’ – he welcomes me to an underground lair. Almost like a small community has been built underneath the burial plot.

You’ve got the legitimate grave in there, but everything else was like a hollowed-out village under there. You could have two or three people under there. And they had an oxygen tank under there, but the key was when I went under, I was chokeslammed and I go under there and Undertaker starts shoveling that on me.

Man, I don’t care if they have a mask for breathing or not – it’s a scary feeling. And then I went scrambling, got this thing – a little plastic baggy. I’m breathing in that oxygen, and he’s covering me. I’m being buried alive.

And then at a certain point my body is half covered, Terry Gordy clubbed the Undertaker with that shovel and pulled me out of that grave.

“I’m not acting when I come out of there,” Foley laughs. “I’m gasping for breath.”