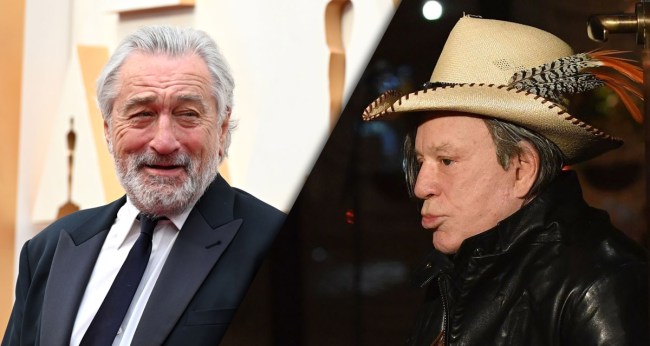 Remember how when the movie The Wrestler came out in 2008 and Mickey Rourke was lauded for his performance in the film leading people to think that he had revived his floundering acting career and was back as a box office draw?

Yeah, that didn’t really happen, did it?

Oh, sure, he did appear in Iron Man 2 and The Expendables in 2010, but since then he’s done 17 films – six of which were Direct-to-DVD – and had titles like Java Heat, Skin Traffik, Blunt Force Trauma, Nightmare Cinema, and Sin City: A Dame to Kill For. (Okay, that last one should have been good, but, well… it wasn’t.)

Apparently, another film in which the 67-year-old Rourke would have liked to have had a part in was the Netflix film The Irishman starring Al Pacino and Robert De Niro.

The problem there, however, at least according to Rourke during an appearance last September on the Italian TV show Live — Non è la D’Urso, was that the 79-year-old De Niro put the kibosh on it.

“Marty Scorsese, great director, he wanted to meet me for a movie with Al Pacino, Joe Pesci, Chris Walken and Robert De Niro,” said Rourke. “The casting person told my manager that Robert De Niro said he refused to work with me in a movie.”

Fast forward to today and Rourke appears to have still not gotten over it, writing on Instagram two days ago…

Hey Robert De Niro, that’s right i am talking to you, you big f**king crybaby.

A friend of mine just recently told me that a few months back you’re quoted as saying to newspapers “Mickey Rourke’s a liar he talks all kind of sh*t”.

Listen Mr.Tough Guy in the movies, you’re the 1st person that ever called me a liar and it was in a newspaper.

Let me tell you something, you punk ass, when i see you i swear to God on my Grandmother, on my brother and all my dogs,i gonna embarrass you severely 100%. Mickey Rourke “as God is my witness.”

The feud between Rourke and De Niro is not a new one though. It dates back all the way to 1987 when they co-starred in the very creepy film Angel Heart.

Rourke claimed that while filming Angel Heart De Niro, who was Rourke’s idol at the time, refused to speak with him or even let Rourke touch him, reported Page Six.

“Now I don’t look up to him no more; I look through him,” Rourke said. “I came up from the s–t. He doesn’t know that life. I lived that f–king life, so every time I look him in the face, I look right through his a–hole.”

“He don’t forget what happened 20 years ago,” he added, “because they have a saying, ‘I took him to school’ before no other actor.”

After Rourke’s appearance on Live — Non è la D’Urso, De Niro’s rep Stan Rosenfield stated De Niro was “aware” of Rourke’s comments, but “according to The Irishman producers, Jane Rosenthal and Emma Tillinger Koskoff, and casting director Ellen Lewis, Mickey Rourke was never asked to be in The Irishman nor was he ever even thought of, discussed or considered to be in the movie.”