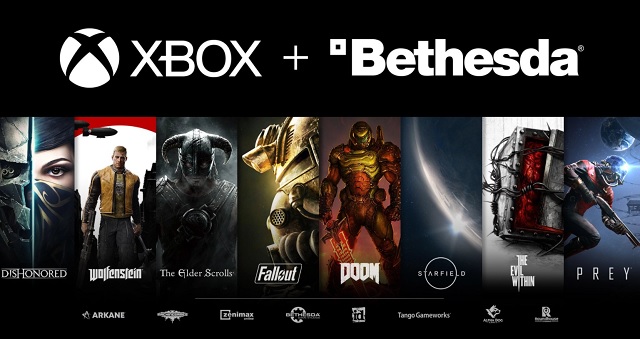 The console wars just got a hell of a lot more interesting.

After complaints that upcoming XBOX console didn’t have enough games upon release, Microsoft went out and bought Zenimax Media, the parent company of Bethesda studios.

BREAKING: Microsoft is planning to buy Zenimax/Bethesda, an industry-shaking acquisition that will give Xbox ownership of Fallout, The Elder Scrolls, Doom, Wolfenstein, Dishonored, and more. Story hitting Bloomberg shortly

Some details from the Microsoft PR

– MS is paying $7.5 billion in cash for ZeniMax Media
– Game Pass has reached 15m subscribers and is growing
– Microsoft has now 23 studios
– Bethesda's future games will be on GP on launch dayhttps://t.co/POy6JDJm4A pic.twitter.com/Q4zm14y8gj

Microsoft is launching a new generation of Xbox consoles in November at the same time as Sony Corp.’s PlayStation 5. The games lined up for the new Xbox have so far disappointed some players, especially after Microsoft delayed its biggest title, Halo Infinite, until next year. The software maker has been adding new game creators and content, including acquiring six studios in 2018 and one last year. It spent $2.5 billion to purchase the maker of Minecraft in 2014.

Microsoft is leaning on its game subscription service, Game Pass, to draw in users and boost revenue and needs compelling content to attract customers to that product. Microsoft said Game Pass now has 15 million subscribers, up from the 10 million it announced in April.

Microsoft confirmed the news with a press release.

Today is a special day… We are THRILLED to welcome the talented teams and beloved game franchises of @Bethesda to Team Xbox!

Today is a special day, as we welcome some of the most accomplished studios in the games industry to Xbox. We are thrilled to announce Microsoft has entered into an agreement to acquire ZeniMax Media, parent company of Bethesda Softworks.

As one of the largest, most critically acclaimed, privately held game developers and publishers in the world, Bethesda is an incredibly talented group of 2,300 people worldwide who make up some of the most accomplished creative studios in our industry across Bethesda Softworks, Bethesda Game Studios, id Software, ZeniMax Online Studios, Arkane, MachineGames, Tango Gameworks, Alpha Dog, and Roundhouse Studios. These are the teams responsible for franchises like The Elder Scrolls, Fallout, Wolfenstein, DOOM, Dishonored, Prey, Quake, Starfield and many more.

It’s currently unclear is Microsoft is planning on keeping Bethesda’s future games as XBOX exclusives or if it’s just a move to increase game pass subscriptions.

Alongside the recent integration of EA's library, Microsoft clearly want to take the opportunity to lead on the subscription service front, which they're doing by miles and miles.

I doubt Bethesda games will be Xbox exclusive in future. They'll likely give themselves timed exclusives and want to push it being on Game Pass.

Microsoft has learned the real money is in software, not hardware.