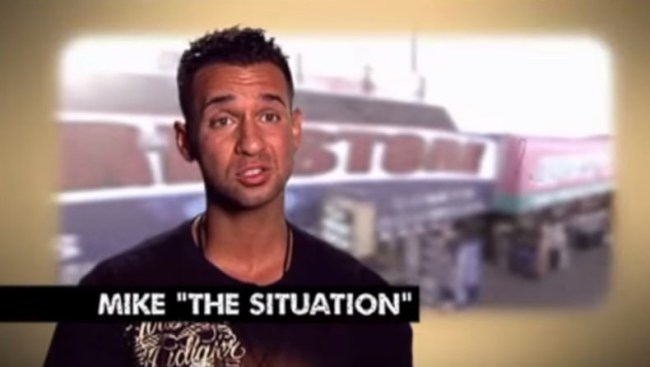 To quote Jersey Shore star Mike Sorrentino: “We’ve got a situation over here” (his words, not mine). The MTV reality star was sentenced to eight months in prison evading taxes on his income. “Cuffs are here!!!”

Prosecutors wanted the GTL enthusiast to get a 15-month prison sentence for tax evasion, but Sorrentino ended up receiving eight months in prison plus two years of supervised release.

The jailhouse will certainly be much different than the shore house, but there’s no Angelina in prison so it could actually be better. Now it all makes sense why Big Daddy Sitch was trying to eat everything in sight during the last season of Jersey Shore Family Vacation.

The Situation and his older brother Marc Sorrentino were indicted in September of 2014 for tax offenses and conspiring to defraud the United States after reportedly failing to pay taxes on $8.9 million in income between 2010 to 2013.

Court papers show Mike Sorrentino made $1,500 to $48,000 per public appearance at nightclubs, bars, and liquor stores in that time span. In many of those appearances, Sorrentino was paid in cash, which wasn’t reported to the U.S. government.

In April of 2017, the Sorrentino brothers were indicted on additional charges including tax evasion, structuring, and falsifying records. In January, The Situation pleaded guilty to one count of tax evasion.

“Mike deeply regrets his failure to pay his taxes, and has spent the past several years turning his life into something positive,” Sorrentino’s lawyer said.

The Situation’s brother has just been sentenced to two years and a $75,000 fine.

I’m sure they were all there to support their reality show friend and totally not as a way to get promotion for upcoming episodes of Jersey Shore.

Mike has been sober for 34 months after struggling with drug and alcohol abuse. Mike credited much of his rehabilitation to his fiancée Lauren Pesce, who he proposed to in June and was aired on Jersey Shore Family Vacation.

“And right now, I’m feeling like all these bad times that I’ve been through, it’s all worth it for this moment right here,” Sorrentino said. “Lauren is the light at the end of my tunnel. Lauren is my everything, Lauren is my best friend, she is my soulmate, she is my better half. And knowing that I found that, I’m willing to face anything in life.”

On the bright side, there is a gym, tanning in the yard, and laundry at the prison.