Mike Tyson Breaks Down To Tears Talking About Tupac’s Death, Remembering The First Time They Met 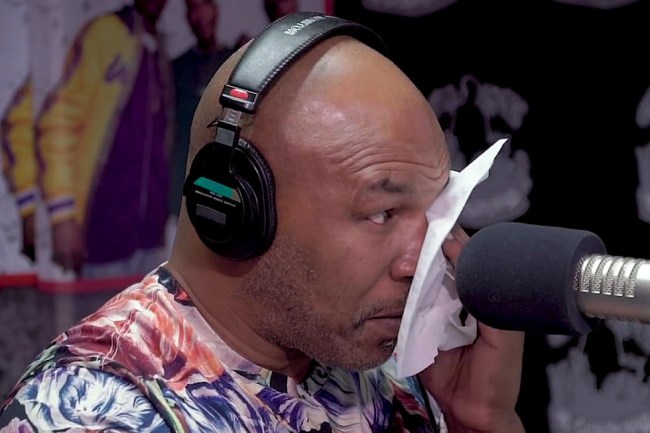 At his peak, Mike Tyson was the most intimidating men on the entire planet, but talking about his friend Tupac Shakur caused Iron Mike to break down to tears. While reminiscing about the life and death of the iconic rapper, Tyson got emotional during a radio interview last week.

The boxing legend appeared on the Real 92.3’s Big Boy’s Neighborhood radio show and talked about a myriad of topics from music to marijuana to mental illness to the last time he saw Tupac. Tyson was asked, “When it comes to athletes and rappers being best friends one of the most iconic friendships was the one between you and Tupac, what was your last memory with Pac?” Iron Mike was overwhelmed with emotion and responded, “Oh sh*t.” Breaking into tears, Mike needed a tissue and a moment to understandably compose himself.

“It’s very difficult to talk about,” Tyson said about his memories of their friendship. “He was just a young kid, and he wanted to be great – and then that happened.”

"I wish I had 5 seconds in the ring with Tupac's killer" @MikeTyson pic.twitter.com/cJeIyMtYk0

Tupac was fatally shot after the boxing match where Tyson destroyed Bruce Seldon on September 7, 1996, at the MGM Grand in Las Vegas with a first-round knockout that is still one of the shortest Heavyweight championship fights in boxing history, only lasting 1:49. Tupac was Tyson’s VIP guest at the highly-anticipated fight.

“[Tupac] was really happy after the fight,” Tyson said through tears. “He came to a press conference with me. We was just talking a bunch of sh*t. I went home and then he left.”

Tupac was shot four times in a drive-by shooting and was rushed to the hospital where Tyson attempted to visit the legendary rapper but was turned away. Tupac would die four days later from his injuries and his murder is still unsolved 22 years later.

In a 2015 interview with DJ Whoo Kid, Tyson went into depth about the first time he met Tupac, real name Lesane Parish Crooks. Tyson was partying at an upscale club and an entourage of 50 people wanted to join the boxer. Tyson allowed the group into the club that included Tupac, who was not famous at the time. About 45 minutes later, “Tupac was on the mic, rockin’ the club,” Tyson remembers. “Pac was dope that way.”

“The next time I see him, I’m in prison,” Tyson said. “He wasn’t famous then. Then he’s famous when I get locked up so he wrote me. He appreciated me letting him in [the club]…Then he visited me and we started talking…That’s how we met each other.” Their unbreakable bond was forged on that night that lived until Tupac’s untimely death on September 13, 1996.

“His energy’s off the wall,” Tyson boasted of Shakur. “Guys don’t do that no more. When I see entertainers, it’s just not that energy…Some guys sell hundreds of millions of records, but they don’t got that stuff. He had that stuff.”

“He’s just a different person,” Tyson said of Tupac. “You know when you see some people in our life, they’re like us but they’re not like us, they’re different.”

During the Big Boy interview, Tyson also admitted that he was addicted to cocaine for about five years. The boxing legend talked about how he got into the cannabis business and he tests out the product before he endorses it. Iron Mike added that he smokes weed every day and prefers the pipe and doesn’t mess with edibles. Iron Mike is starting up a 40-acre “cannabis resort” in the Mojave Desert, about 110 miles north of Los Angeles called “Tyson Ranch.” The marijuana-based project will produce high-quality and new strains of THC and CBD by “master growers,” an “edibles factory,” an amphitheater, and an upscale campground.

He also said that his face tattoo didn’t hurt as much as you would think it would. Tyson says he doesn’t regret his tribal face tattoo because at the time it was “cutting-edge.” He’s unconscious about his face tattoo and when he sees other people with tattoos all over their face he says, “When I see someone else with a bunch of crazy tattoos on their face I say, ‘Woah this guy is out there.'”

As far as music, Tyson loves Migos and Drake. When it comes to being bi-polar, Tyson advises anyone dealing with mental illness to “take your f*cking medicine.” Below is the entire Big Boy interview with Mike Tyson.