Man Flashes Woman, He Quickly Discovers That She’s A Military Veteran Who Would Tackle And Pin Him To The Ground 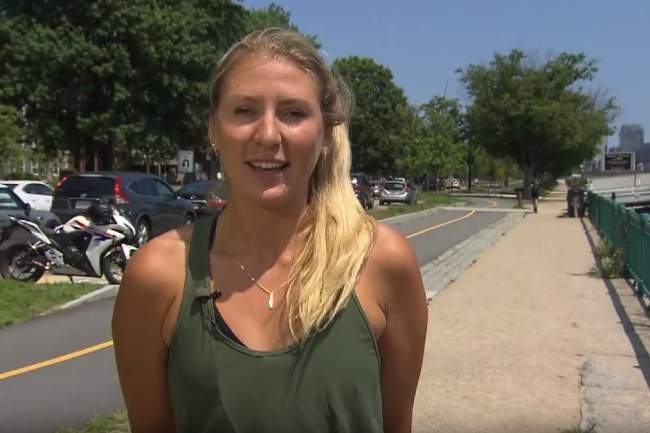 Guys, you shouldn’t be pulling out your junk in front of women in public because it’s not cool, it’s illegal and you might offend the wrong woman who then tackles and pins you down on the ground. That’s what happened in Cambridge, Massachusetts when one man flashed a woman and she ended up destroying him.

On July 18, A man was jogging and flashed his junk at Aia Polansky. Little did the perv know that he had just flashed a 6-foot-1 personal trainer and former Israeli military veteran. Instead of calling authorities, Aia became the authorities. The 33-year-old chased down the man, tackled him and pinned him.

At first, Polansky thought the man had accidentally pulled his pants down and was going to take a piss. She quickly came to the realization that he pulled out his twig and berries on purpose because he showed off his frank and beans several times and looked directly at her while doing so.

Polansky, who is a personal trainer and tennis coach, asked at least four people in the area to call 911, but nobody did anything. “I was yelling, ‘Call 911. Call the police.’ I was waving my right hand,” she said. The mother-of-two jogs this path at least three times a week.

“When I was holding him down, he was terrified. He was really, really scared,” Aia said. Unfortunately, the man was able to wriggle free and escape the Israel Defense Forces (IDF) veteran.

However, Massachusetts State Police did have security camera footage of the crime. The police released the video of the incident and are asking the public to identify the flasher. Police said they did not release footage of the man exposing himself because they want to “protect the integrity of the investigation.”

“It was not his lucky day, because I just decided it’s not going to happen and I decided to chase him down,” Aia said. “I mean, I’m 6-[foot]-1[inch], pretty fit. It’s not a very good victim to go after.”

Life is a beautiful adventure! Get to know yourself.

“She reacted in the blink of an eye what she felt was the best form of action,” State Police Trooper James DeAngeles said. “Good for her. I think she put the fear of God in the guy.”

Police say the suspect is a white male with a heavy build, short dark-colored hair and a receding hairline. If the flasher is brought to justice, he could be charged with open and gross lewdness. Don’t pull your junk out guys because you might get your ass dropped.