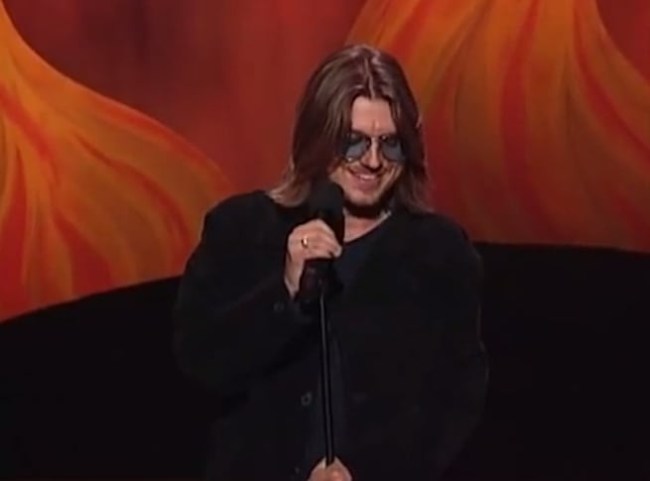 It’s been over 13 years since iconic comedian Mitch Hedberg was found dead in a New Jersey hotel room after accidentally overdosing on cocaine and heroin. He was just 37 years old. Since then, there haven’t been any comedians who could match his deadpan one-liners and his keen observations of the shortcomings of everyday life (ok, Demetri Martin comes close). Hedberg was always operating on a different plane.

-A severed foot is the ultimate stocking stuffer.
-I’m against picketing, but I don’t know how to show it.
-An escalator can never break, it can only become stairs.

Although Hedberg cannot deliver any new comedy into the world himself, his widow is sitting on a treasure chest of her late hubby’s never-before-heard material.

In a guest post for the Hollywood Reporter, Lynn Shawcroft writes about how she hoarded everything that reminder her of Mitch, so as not to lose memory of him–“old magazines, gum wrappers, withered receipts.” She also hoarded every single one of Mitch’s writings and recordings.

Mitch was constantly jotting ideas onto paper. I have boxes and boxes of his notebooks, envelopes stuffed with hotel pads and scribbled-on napkins. I even found an airplane barf bag covered with notes. When he wasn’t writing, he was talking into a microcassette recorder, so I also have boxes of microtapes of him practicing and perfecting his material — material that’s never been heard. And then there’s the footage. Mitch and I shot four of his shows on 16mm. That’s enough for a brand-new concert film. And there’s other film Mitch shot himself, with his voiceover. Enough for a documentary. A documentary that he could narrate himself!

Shawcroft says she kept the tapes and notes in three big iron safes in a cabin they shared in the mountains before recently bringing them to L.A. where directors are clamoring to grab the rights to them. Shawcroft says that she’s been digitizing all his material herself and “every half-written joke, every spontaneous utterance onto microtape, will be accessible with a few clicks on a mouse.”

She added, “And that means at some point soon, all of you will be hearing and seeing Mitch again.”