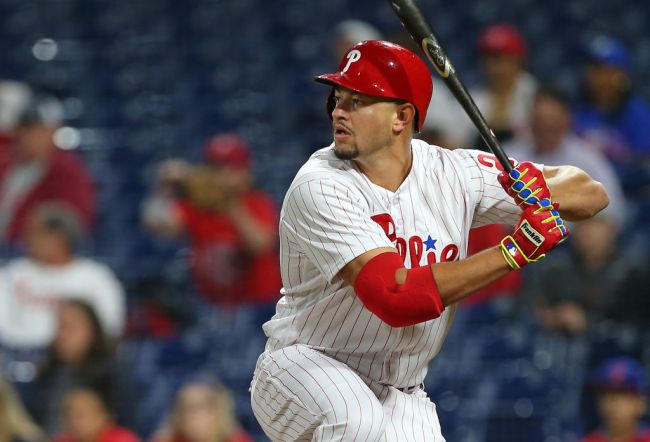 Former MLB outfielder Dylan Cozens is trading in his baseball glove for a helmet and shoulder pads. The 6-foot-6, 27-year-old announced on Wednesday that he is retiring from professional baseball to chase his dream of playing in the NFL.

I’ve decided it’s time to chase my dream of playing in the @NFL. I want to thank the @phillies @RaysBaseball and @Brewers organizations for giving me the opportunity to play professional baseball but more importantly the people, experiences, and memories I’ll keep forever.

Cozens most recently played for the Milwaukee Brewers’ Triple-A team in Nashville. He was drafted in the second round of the 2012 MLB Draft and signed a contract worth $659,800 in signing bonus. Not too bad.

Potential as a baseball prospect.

The Arizona-native can mash. That’s his thing. Average trended low and strikeouts trended high throughout his career, but when Cozens got ahold of one, it was gone.

Got the Monday blues?

Here's a monster home run by @dylancozens to brighten your mood. pic.twitter.com/fX9OJ4rbl8

As a senior in high school, he posted a .520 batting average and hit 19 home runs in 33 games. 19 home runs broke the school’s single-season record that was held by longtime MLB first baseman Paul Konerko.

After he inked with the Phillies, Cozens kept crushing nukes. He hit 40 home runs in 2016 on the AA level and led the league in runs scored, extra-base hits, total bases, RBIs and slugging percentage. But he also struck out a league-leading 186 times.

The trend continued into AAA in 2017 and he batted .210 with 27 home runs and 75 RBIs while leading the league in strikeouts— again.

.@dylancozens 😗 this ⚾️ goodbye! It's his I.L. leading 22nd home run of the season. pic.twitter.com/JiG32CSaph

2018 was a little bit better and his average picked up, still hitting 21 bombs. And bombs might be an understatement.

Cozens was called up in 2018 and struggled. He hit just .158 with one home run in 38 at-bats with Philadelphia.

First major league home run? ✅
Give the Phillies the lead? ✅

It's a good day for Dylan Cozens. pic.twitter.com/mNUKlCE9PY

He was released after the season. Cozens signed a two-year deal with the Tampa Bay Rays but struggled with injuries in year one and had year two cancelled because of COVID-19.

In December of 2020, the 26-year-old signed with the Brewers and was optioned to play AAA in Tennessee. His numbers didn’t pick up much, but he was still crushing massive home runs.

Absolutely crushed! @dylancozens leads off the 6th with a monster home run! pic.twitter.com/6SOKHUd0Iu

After spending the first two months of the MiLB season with the Sounds, Cozens has decided to call it a career on the diamond. His father, Randy, was drafted by the Denver Broncos in 1976 and Dylan wants to follow his footsteps.

Cozens has the frame, but he hasn’t played organized football since the fall of 2011. His senior season as a defensive end at Chaparral High School was impressive.

Over the course of 15 games, the 6-foot-5, 230-pounder recorded 34 solo tackles, 49 total tackles and 8.5 sacks. Cozens’ performance was strong enough to earn him a scholarship offer from the University of Arizona, but he turned it down to sign with the Phillies organization.

Now, nine years since his high school graduation, Cozens will return to the gridiron. It is a tall ask for the 27-year-old, but if Tim Tebow can do both, what is stopping him?