So, What’s Moff Gideon Up To On ‘The Mandalorian’? 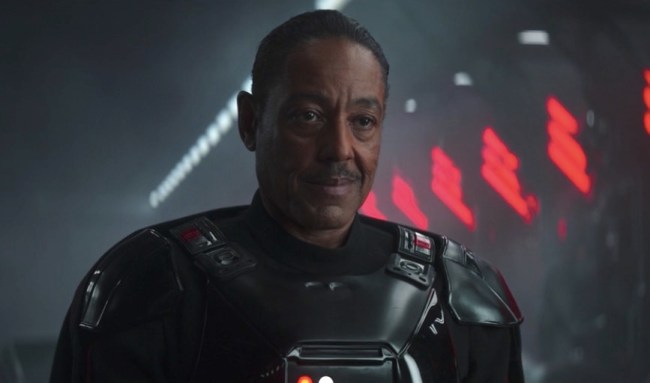 After beginning season two with a handful of “adventure of the weeks”, The Mandalorian got back into the nitty-gritty of its main narrative last weekend, as “Chapter 12: The Siege” saw the return of Giancarlo Esposito’s villainous Moff Gideon.

As I’ve breathlessly argued on the Post-Credit Podcast that the series is at its best when it embraces the serialized storytelling of its main narrative, even if its only in a tangential fashion, and that’s exactly what we got in The Siege, as Mando and the gang not only stormed an Imperial base, but we got a much-needed update on Moff and what he’s up to.

And what is he up to, exactly?

During the siege of the Imperial base in the second half of the episode, Mando, Cara Dune, and Greef Karga stumble upon tanks filled with humanoid-shaped figures in them, discovering that they’re actually not blowing up a military base, but a scientific lab. And in this lab, there’s a message from season one’s Dr. Pershing, who says in a hologram message that they’ve been using the high M-count blood of The Child to try and create Force-sensitive clones for what appears to be some sort of army. As they do so, the theme music for Supreme Leader Snoke — the Andy Serkis-voiced villain from the sequel trilogy — can be heard playing in the background.

Then, in the closing moments of the episode, Gideon can be seen standing in a room filled with what appears to be unused armor that’s simply waiting for soldiers to fill them.

Gideon’s goals here seem to be two-fold, if not three-fold. First and foremost, there’s the obvious: he’s trying to build a Force-sensitive army, perhaps even an army of Dark Troopers. Furthermore, as the wielder of the Darksaber (which was seen in the Season One finale), there’s also the possibility that Gideon is attempting to use Baby Yoda’s high M-count to imbue himself with the powers of the Force.

There’s also the unfortunate Palpatine connection: given the appearance of Snoke’s theme-song during the scene, there’s the suggestion that Palpy is connected to whatever sort of experiment Gideon is conducting. As much as the possibility frustrates me, it’s also quite likely given that it’s difficult to imagine a scenario where any Imperial/Empire-related figure, especially such a high-ranking one, would be able to conduct massive Force experiment without Palpatine’s knowledge. We can only hope The Mandalorian avoids this route, as looping back into the Skywalker Saga would possibly be a deathblow for the series.

Given that the Force-sensitive soldier route seems obvious, the real question becomes whether or not Moff Gideon is trying to give himself the Force. At this stage, we simply don’t know enough about the character, his desires, and motivations to make that call. For all we know, his Darksaber could be for sure and he could have no idea how to actually wield the thing. As far as I know, a character scientifically giving himself the powers of the Force has never been done before, and given the likely dense explanation it would take, I doubt it happens here.