Molten Hot Lava Versus Dry Ice, Scientist Pours One Out To See What Happens And It’s Awesome 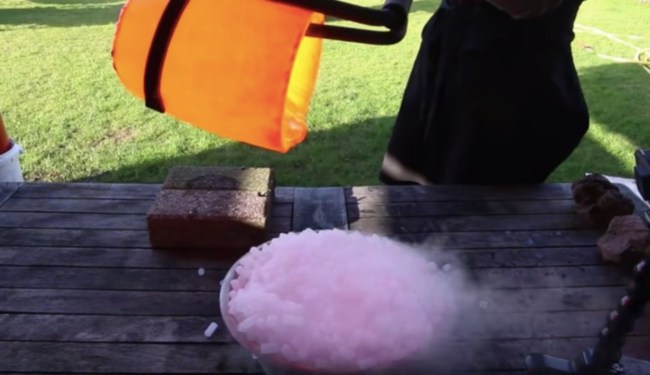 I don’t really spend anytime whatsoever thinking about dry ice or lava. For starters, I grew up and Florida and the only times I’ve ever been close to volcanoes have been in Panama, Costa Rica, and Iceland. Lava just isn’t something I find myself thinking about but this science experiment definitely piqued my curiosity.

Likewise, I cannot recall a time when I needed dry ice. I’m not sure I could even tell you where to buy dry ice if you needed to. I assume the grocery store would carry it but that could be wrong.

The last time I even saw the stuff was when I loaned my parents my YETI Cooler when they were on a week-long road trip and they loaded it up with glass bottles of juice + dry ice not realizing that the cooler keeps regular ice frozen for a week. The end result was pretty hilarious. I got some panicked text messages from them about how everything in the cooler exploded because it had gotten *TOO COLD* and the glass shattered. Let that be a lesson to never load up your YETI with dry ice.

The YouTube channel PressTube put together this clip where they create lava and then dump it over a bowl of dry ice.

As my colleague Paul pointed out, this could easily be viral marketing for the White Walkers battle in the final season of HBO’s Game of Thrones. The fire barely puts up a fight. It releases that haunting sound and then turns into some pretty badass art though.

If I was rich and threw lots of fancy house parties I’m fairly certain that I’d just hire YouTubers like this to come to my parties and perform outrageous science experiments for my guests. If you’re not spending your wealth on extravagant shit like that then you honestly have no business being rich.