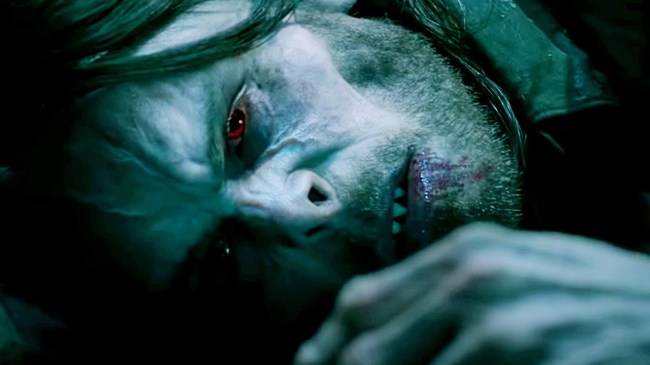 While I usually try to avoid discussing spoilers such as post-credit scenes before movies actually hit theaters, The Curious Case of Michael Morbius is an entirely different story as the actual director of the film, Daniel Espinosa, has already discussed it in detail on Twitter.

❗️Second spoiler warning❗️#MORBIUS director Daniel Espinosa has taken part in an exciting Q&A. See the thread for the reveal… https://t.co/IS8Oc5W6Hs

Nevertheless, let this be a reminder this article will contain spoilers for the upcoming Sony film Morbius, which is hitting theaters on Friday, April 1.

having No Way having Morbius
Home spoiled spoiled
for you for you pic.twitter.com/F6aosbNHNS

If you’ve seen Spider-Man: No Way Home, then you know Doctor Strange botches his spell for Peter Parker, which is what brings the various villains into their universe, including Tom Hardy’s Venom, who was seen (presumably) being sent back to his old Sony Universe in the No Way Home post-credit scene.

Apparently playing off of that, in the Morbius post-credit scene — if you want to actually watch the scene, we’re not going to post it here, but you can find it if you search hard enough on Twitter, but we will, however, describe it to you, so again, SPOILER WARNING — Michael Keaton’s Adrian Toomes/Vulture, who was last seen in Spider-Man: Homecoming, materializes in a jail cell in the Morbius universe.

Without any indication of how he reobtained his suit, Vulture is then seen tracking down Jared Leto’s Morbius and says, quite bluntly: “Nice to meet you Doc. I’ve been reading about you. Not really sure how I got here but it has to do with Spider-Man, I think. I’m still figuring this place out but I still think a bunch of guys like us should team up — we could do some good.” A professional screenwriter wrote that.

Given the clumsy nature of the scene, Marvel fans have since taken to Twitter to have some fun at the film’s expense:

Watched that Morbius post credit scene… I have to laugh 😂

That Morbius post credit scene was funny asf, Sony dont know what they are doin 💀

So that Morbius post credits scene is just mind-numbingly stupid

im still gonna watch morbius just to see what happens in the film and how it looks..but them post credit scenes were🤮🤮🤮