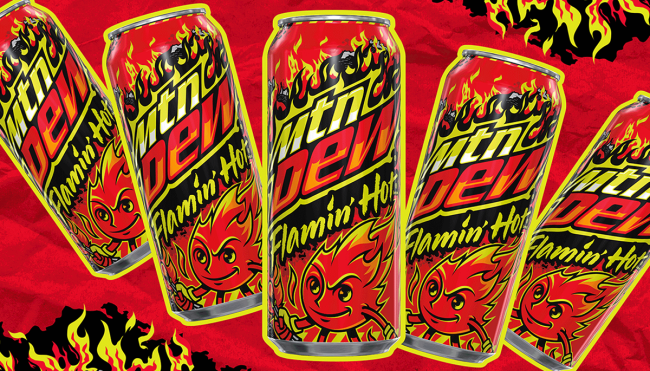 A couple of weeks ago, Mountain Dew made some waves online when it revealed teamed up with the folks at Boston Beer Co. for a hard version of its flagship soft drink, and the company was kind enough to make sure the world had plenty of time to prepare for the arrival of the boozy variation that’s slated to hit shelves early next year.

However, it would appear the brand is just getting started when it comes to rolling out new products that pack a bit of a punch, as it dropped an equally intriguing announcement on Wednesday when it revealed its newest partner in crime: Flamin’ Hot Cheetos.

The collaboration—which Mountain Dew has dubbed “one of our most provocative beverages yet”—will come in the form of a limited-edition soda that will be sold exclusively on The Dew Store starting on August 31st. The drink has been officially dubbed “MTN DEW FLAMIN’ HOT” and is described as a “unique blend of spicy and classic sweet citrus flavor,” which is certainly an intriguing concept.

I’m probably getting ahead of myself here, but the jalapeño margarita fan in me can’t help but wonder if we’ll end up getting treated to a spiked version of the Flamin’ Hot flavor at some point in the future. Only time will tell, but hey, a man can dream.