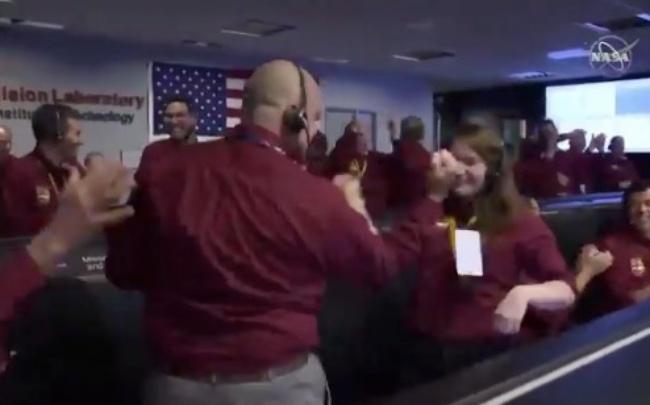 It was a huge day for NASA scientists working on the InSight probe mission. The probe landed on Mars today despite Mars being one of the least hospitable places in the galaxy and the InSight probe will now begin a 2+ year study of the crust, core, and mantle on Mars.

As is the case with anything to do with NASA, the InSight probe mission has been expensive as hell. The $814 million mission has a goal of researching the interior of Mars. It took the InSight probe seven months to reach Mars after leaving California’s Vandenberg Air Force Base on an Atlas V rocket and the entire mission could’ve gone up in flames today if the landing went poorly. Alas, things went well.

There’s a chance you watched the InSight probe landing on YouTube, NASA racked up hundreds of thousands of views on YouTube Live. However, even if you were watching in real-time there’s a solid chance you missed these two NASA scientists throwing down an NBA-worthy handshake that they’ve probably been working on for the entire 7 months it took for the probe to reach Mars.

I’ve set the YouTube video below (of the full landing) to start at the proper mark (39:36) and I’ve included a Twitter version of the handshake.

Its new home is Elysium Planitia, a still, flat region where it’s set to study seismic waves and heat deep below the surface of the Red Planet for a planned two-year mission. Learn more: https://t.co/fIPATUugFo pic.twitter.com/j0hXTjhV6I

The InSight probe already has its own Twitter account which will be providing updates from Mars for the next several years as the planet’s inner core is studied. You can check out the @NASAInSight account to follow that. You can also find me on Twitter at @casspa if you’re not following me yet.

If you have 74 minutes to kill and want to watch the InSight probe landing in Mars in full, you can do exactly that by checking out the full footage below that’s been uploaded to the CBS News channel.

For more on the InSight probe, you can check out this in-depth article on USA Today.