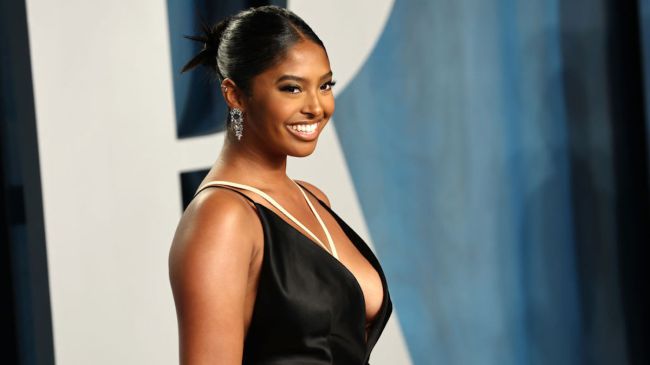 Natalia Bryant, the teenage daughter of NBA legend Kobe Bryant, is seeking to file a restraining order with the Los Angeles Police Department against a 32-year-old stalker named Dwayne Kemp.

Bryant, 19, says Kemp, now 32 years old, first attempted to contact her when she was just 17. The report from TMZ says Kemp is “under a delusion they have a romantic relationship” despite the fact that the pair have never met or interacted.

According to the docs, Kemp is in the process of buying at least one gun — the docs say the sale is imminent. The docs go on to say he has threatened to buy both an AK-47 and a fully automatic Glock. The docs say Kemp is a gun enthusiast who has been arrested and/or convicted of at least 4 crimes, including one involving firearms.

Natalia claims the man once sent her a DM with an image of her late father Kobe and wrote, “Thankful For Him Birthing You, Hopefully We Can Birth Him… ‘Kobe'”, adding a red heart to the message. The docs say he had the hopes of having “a Kobe-like child together.” [via TMZ]

Bryant passed away in January 2020 at the age of 41 years old following a tragic California helicopter crash. Bryant’s 13-year-old daughter Gianna and seven others were also aboard the aircraft at the time of the accident.

Prior to his untimely death, Bryant had spent his 20-year NBA career with the Los Angeles Lakers, where he won five NBA titles and was named to the All-Star game 18 times. Named league MVP in 2008 and widely regarded as one of the greatest basketball players to ever live, the NBA renamed the All-Star Game MVP Award trophy after Bryant following his death.