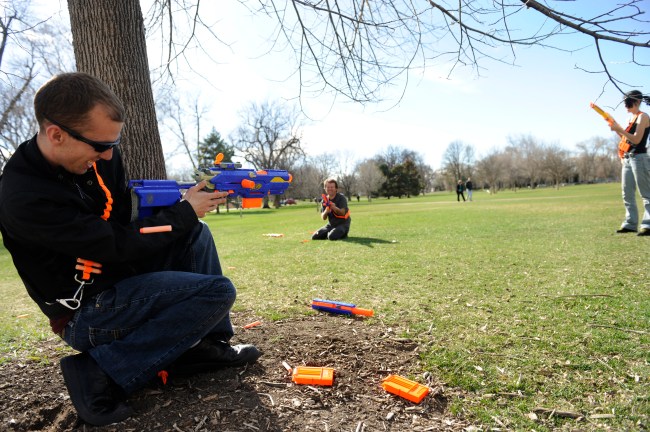 In a potentially concerning development that could have numerous negative outcomes, criminals are altering real guns to make them appear like Nerf guns. Actual firearms are being painted to make them look harmless, according to police in North Carolina.

Deputies with the Catawba County Sheriff’s Office seized numerous firearms during a search warrant raid in North Carolina on March 13. During the drug bust, law enforcement discovered cocaine, psilocybin mushrooms, weed, and $2,300 in cash. Deputies also recovered a cache of firearms including pistols, rifles, shotguns, and most notably a Glock 19.

The Glock 19 and micro roni attachment were painted bright blue and orange to match Nerf toy gun. The firearm even had a Nerf sticker and the tips looked like a toy. The converted Glock 19 featured a fifty-round drum magazine. CCSO admitted that the gun is not illegal, but it was “concerning to law enforcement.”

The Catawba County Sheriff’s Office noted that there was a child inside the home.

“You’re looking at shotguns, he’s got quite a few pistols. He’s converted some of the pistols into those Nerf firearms,” Tim Harwood with USA Tactical Firearms told FOX 46.

Harwood revealed that some felons are getting their guns to look like toys as a tactic to illegally carry weapons.

“I believe it’s getting more and more prevalent out there, unfortunately,” Harwood stated. “But again, criminals are not going to obey, you know the laws, and that’s good that we’re getting these types of firearms off the street.”

“Another success resulting from our area Narcotics Teams working together,” Sheriff Don Brown said in a statement. “Our agencies pooling their resources allows for a greater impact to be felt county wide.”

“Authorities charged 35-year-old Catawba resident Damien Alonzo Burch with felonies of possessing cocaine and mushrooms, as well as a misdemeanor of possessing marijuana,” The Hill reported.

This opens the door for a number of possible outcomes, none of them positive.