Anyone who’s spent countless hours of their life scrolling aimlessly through Netflix (which is really anyone who has ever used Netflix) is likely very familiar with some of the tens of thousands of different categories the platform has compiled to provide users with some more targeted options while navigating its seemingly endless sea of movies and television shows.

Over the years, The Almighty Algorithm has dreamed up hyperspecific collections with labels like “Provocative Business Movies,” “Dark Independent Mother-Daughter Dramas,” “Feel-Good Deep Sea Movies,” and others that make you wonder how much work went into developing something with seemingly so little utility.

However, that doesn’t mean there aren’t any categories that occasionally come in handy—including one that made its debut on Monday.

Over the weekend, Saturday Night Live aired a prerecorded short featuring Pete Davidson, Chris Redd, Gunna, and Simon Rex (a.k.a. Dirt Nasty) singing the praises of “Short-Ass Movies” like Austin Powers, Bambi, and most of the films in the Ernest franchise.

It appears Netflix realized Davidson and his crew might be onto something, as one of the brand’s accounts tweeted a link to an official “Short-Ass Movies” collection tailormade for anyone with a short attention span (almost all of them clock in at around 90 minutes or less if you take the credits out of the equation). 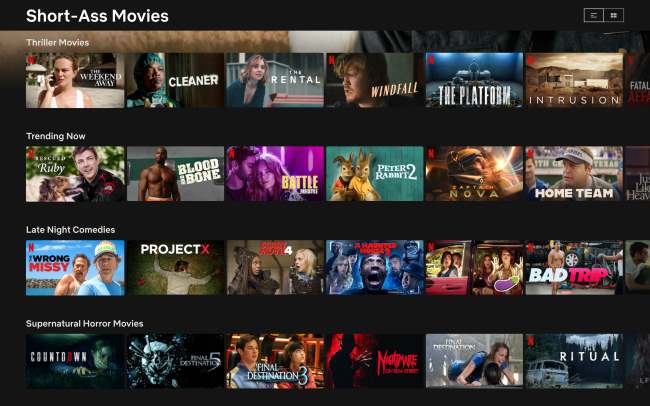 Based on a quick examination of the options, it does appear the Venn diagram of “Short-Ass Movies” and “Good Movies” is basically two barely interlocking circles, but I guess beggars can’t really be choosers.