Here’s The First Trailer For Netflix’s ‘Last Chance U: Basketball’ 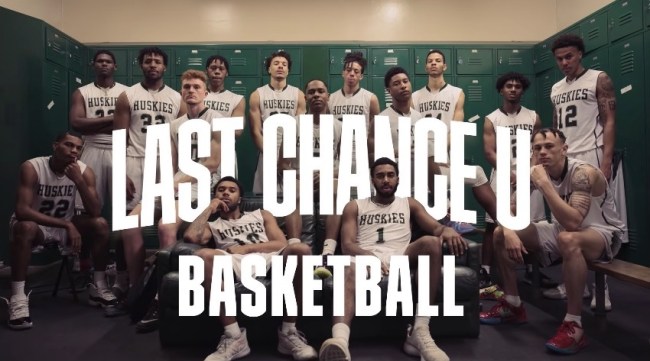 Is there a Netflix series as consistently excellent and as purely watchable as Last Chance U? Year after year, regardless of which college the Netflix doc ultimately highlights, Last Chance U delivers an emotional deep-dive into the life of a JUCO college athlete that’s literally fighting for their future.

This year, while the acclaimed docuseries may be changing sports — swapping out the football gridiron for the basketball court — it looks set to bring the same drama that we’ve all come to expect.

Here’s the official synopsis for the first season of Last Chance U: Basketball, via Netflix:

From Greg Whiteley (Cheer) and the team behind Emmy-winning Last Chance U comes LAST CHANCE U: BASKETBALL, an honest, gritty look inside the world of community college basketball. Over the course of eight episodes, viewers will follow the East Los Angeles College Huskies (ELAC) in their high stakes chase to an unprecedented California state basketball championship. Led by passionate head coach John Mosley, the ELAC team is made up of former D1 recruits and powerhouse athletes hustling to prove themselves for a last chance to fulfill their dreams of playing at the next level. But the team is tested as the players battle adversity, inner demons, and emotions on and off the court.

Season one of Last Chance U: Basketball will hit Netflix in the United States on Wednesday, March 10.