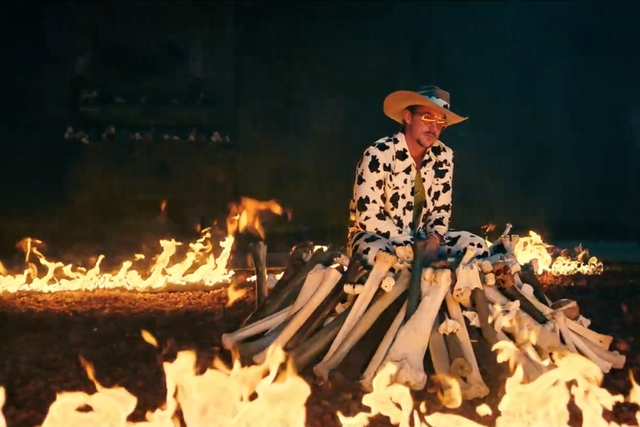 Welcome to the BroBible New Music Round-Up, where you can count us as one of those people not believing these Rihanna pregnancy rumors. For more follow me on Twitter:  @ryanoconnell79

With Green Day back in the news, I thought it made sense to serve up a reminder of how great of a band they’ve been for over two decades.

I don’t speak Spanish. I took Spanish I in college, but long story short, I decided it was better to go see someone to certify that I had a learning disability that made it difficult, if not impossible, to tackle languages, than to finish my school’s requirement of three semesters of a lanuage. I took a Japanese film class instead. Super intense, man!

So with that being said, I have no idea what J. Balvin and El Alfa, a Dominican dembow artist, are saying in this song. And I’m perfectly okay with that. This song is fire in every sense of the word. The bounce is infectious and I love the flute line that runs throughout the track.

Major Lazer underwent a lineup change this summer, with Jillionaire having left the group and being replaced by Ape Drums. I mean, if you’re a jillionaire, you’re just doing the music thing for fun anyway. You know, because you’re a jillionaire. This is the second tune the group has released since the change, as they dropped “Make It Hot” a few weeks after Jillionaire dipped out.

As for “Que Calor,” according to a press release, the track “incorporates elements from both Balvin and El Alfa’s home country, infusing a sample of Toto La Momposina’s traditional Colombian-cumbia song “Curara” with the Dominican dembow rhythms that have become a mainstay of modern pop.’

And according to the New Music Round-Up, we appreciate Diplo’s dedication to the western look.

Green Day “Father of All…”

Green Day last released new music back in 2016, when they dropped Revolution Radio, an album that was by all accounts, not that bad. Unfortunately, the album failed to move the needle that much and it looked as if the band was either fading away or nestling comfortably into the nostalgia part of their career. After all, it has been twenty five years since Dookie came out. No one would fault them if they (like so many other bands) elected to do a tour celebrating the anniversary, playing the album in full.

Although as bassist Mike Dirnt pointed out when the subject came up recently, “those would be really short shows.” Dookie is about a half hour long. My man makes a good point.

Green Day have never been one to do anything quietly, so having passed on the nostalgia route, they are definitely not going to simply go out quietly. No way. Instead, they’re releasing new music.

Earlier this week, the band announced the release of a new album, Father of All… and dropped the album’s lead single. Don’t get too excited, though. The album doesn’t come out until February 7, 2020. Ugh. On Thursday night, the band performed the song live on Jimmy Kimmel Live.

In a recent interview with Rolling Stone, Billie Joe Armstrong talked about wanting to change things up for the new record, to find a new sound.

“I’d always loved British mod music from the Sixties, but I wanted to go to where the source was and see if I could put [soul] through the Green Day filter,” says Armstrong. “It was a lot of trial and error, a lot of pulling my fucking hair out.”

In the interview, Armstrong says the new album features the band “experimenting with danceable grooves, wiry riffs, and sounds that can range from New Wave to vintage R&B.” However, while the band did jump start a second act by going after the Bush Adminstration with American Idiot, don’t expect them to take shots at Donald Trump this time around.

“We didn’t want to give a piece of shit like Donald Trump any more airtime than he deserves,” Dirnt says. “You’ve already had your 15 minutes. Fuck off.”

The band wasn’t done making news there though, as they also announced the Hella Mega stadium tour, which will feature them touring with Fall Out Boy and Weezer. The tour kicks off next summer.

”We talked about how we weren’t really wanting to do stadiums and do something that was like throwback to the Monsters of Rock Tour,” Armstrong said about the idea for the tour, referencing a series of metal tours in the 1980s and early 1990s featuring Van Halen, Metallica, Faith No More, Dio and Aerosmith. “There was, of course, Fall Out Boy and Weezer and now we’re stoked.”

A day or so later, they released this delightful, little promo video.

And hey, speaking of Weezer…

Weezer “End of the Game”

Something must have clicked for Rivers Cuomo when Green Day called and told them about doing an ’80s metal-inspired stadium tour because Weezer’s new tune definitely has an 80’s hair metal vibe to it. I mean, it’s still Weezer, so it’s catchy as hell. But you can’t sleep on Cuomo going guitar hero throughout the track.

The band debuted the song this week on Jimmy Kimmel Live, with the new song set to be included on the band’s next album, Van Weezer, which COMES OUT NEXT MAY!

What the hell is wrong with these guys? We’re really releasing singles almost a half of a year before the album comes out now? Dude. Not cool.

Speaking to Zane Lowe on Beats 1, Cuomo said that the new album, which again, COMES OUT NEXT MAY, is “like The Blue Album but with more riffs,” Cuomo said. “Metal, hard rock riffs. But it’s still pretty catchy pop rock.”

Cool, cool. I can’t wait until the NFL season and March Madness is over, the NBA and NHL playoffs are about to start, and a new baseball season has begun to listen to it.

On Tuesday, Cold War Kids announced that they’d be releasing New Age Norms 1 on November 1st. The album will be the first of a trilogy. The dropped the first single off of the album, “Waiting For Your Love”, along with the news of the new album’s release date.

In a statement, Nathan Willett talked about the influence Kanye West had when they had started working on new material.

“Last summer we were on tour when Kanye was putting out his new records. Pusha T, Kids See Ghosts, Nas, etc. They were eight songs each. It was so fun waking up to these brand new records and taking them in as a whole while hanging out, working out, talking shit, pushing each other. I knew then I wanted our next release to be three volumes – eight songs each.”

Listen, I didn’t wake up this morning expecting to be bopping around the office to a new Migos jam set to the iconic theme of The Addams Family, but here I am.

The new song, which also features Snoop Dogg, Columbia singer Karol G and producer Rock Mafia, is part of the soundtrack to the new Addams Family movie. The movie comes out on October 11 and Snoop is the voice of Cousin It, because sure, why the hell not?

The Greyhounds, the Austin funk-jazz trio, dropped another smooth little ditty right into our laps Friday morning. As is their style, the track has a the feeling of a smokey, dark lounge in the middle of nowhere.

It’s a short one, only a few clicks over two minutes long, but if you’re hip to the band, it gets job the done. If you’re unfamiliar with the group, it’s a good taste of what they’re all about.

The band is on tour this fall.

A tip of the hat to The Lumineers. It would have been so easy for them to chill out, live the rest of their lives comfortably on the back of the success of “Ho Hey.” I know I would.

But I’m not The Lumineers. They are The Lumineers and they have decided to keep releasing music. What a concept!

Lumineers III is…wait for it, the band’s third album. Really nailed it there. Does it sound all that different from their previous albums? Yeah, not really. Does that matter? Yeah, not really. If you’re a fan of the band, it’s not as if you’re looking to change things up to much.

If you’re interested on learning a little bit more about the band and how they dealt with the sudden popularity that “Ho Hey” brought them, they appeared on Chris Shiflett of the Foo Fighters’ Walking the Floor podcast earlier this summer. 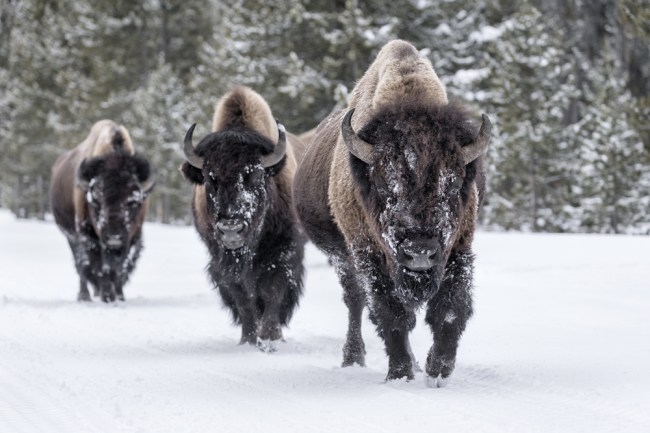 Eddie Money, who gave us such unforgettable tunes as “Take Me Home Tonight” and “Two Tickets to Paradise” passed away Friday morning in Los Angeles.

“The Money Family regrets to announce that Eddie passed away peacefully early this morning,” the family said in a statement to Rolling Stone. “It is with heavy hearts that we say goodbye to our loving husband and father. We cannot imagine our world without him. We are grateful that he will live on forever through his music.”

Money was forced to cancel a summer tour in July after developing pneumonia while recovering from heart valve surgery. He had vowed to get back on the road later this year, but in August, he revealed that he was battling stage 4 esophageal cancer.

In 2018, Money told Rolling Stone that he didn’t want to retire, because I get the chance to dress up, I can shave and shower and get a haircut and go out there and do “Two Tickets to Paradise” and “Baby Hold On” and the fans love it. I’m helping my kids out. I got my son back there on drums, my other kid’s great on rhythm guitar, my daughter is dancing around like it’s her first gig. I feel very fortunate that I’m still doing what I’m doing.”

This Week in You Should Check This Out

About a month ago, The New York Times launched a new podcast, 1619, that looks to tell the full story of slavery in America. So far, they’ve released three episodes and while all three are interesting, the third episode, “The Birth of American Music” is particularly fascinating.

Wesley Morris, a Times’ critic-at-large, starts with Yacht Rock, goes all the way back to 1930 and “the birth of American pop culture,” before making his way back to Yacht Rock. It sounds wild, but he makes it work.

Yo, What’s Up Lizzo?

I WOULD SING THE BASS DRUM IN A RIHANNA FART JUST TO MAKE THIS COLLAB HAPPEN 🤯 https://t.co/233BqBqGLj 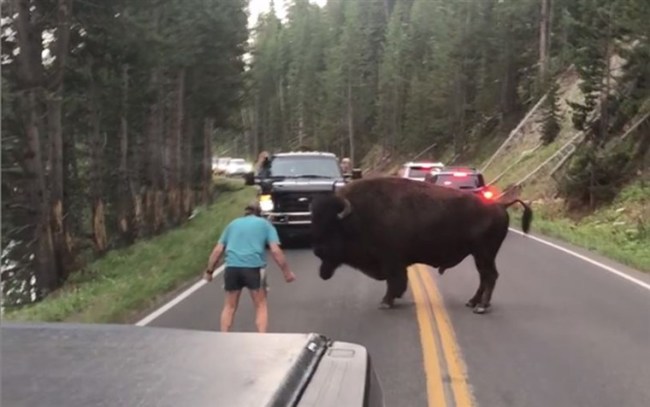 So out ol’ Montana way, they seem to have an issue with bison roaming the state’s highways. A jaded East Coaster like myself might assume that this shouldn’t be a big deal. It’s Montana.

Well, that’s not correct. And ignorant. Apologies to Montana.

But no really, the bison think they own the place and as a result, Montana law enforcement officials have been forced to turn to less than traditional methods to combat the problem.

“Being a deputy around West Yellowstone comes with unusual duties, including herding bison off the highway so no one gets hurt. When deputies respond to a bison on the road, they turn on lights and siren and encourage the animal to leave the road with an air horn. With a reluctant bison, they’ve been known to play AC/DC’s Hell’s Bells over the speakers — that usually seems to work.”

Y’all ever thought of trying “Thunderstruck?” Damn right that’ll do the trick.

We’ll be keeping an eye on this developing story.