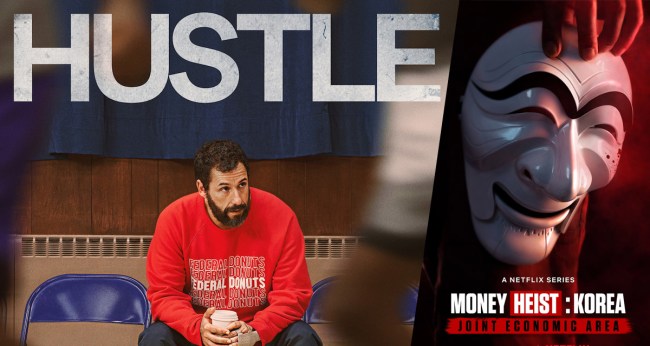 What did everyone do before the internet and all of these awesome streaming services? What did people do back in the day? Good thing we don’t have to worry about that because Netflix just released their list of what’s new for the month of June (as well as what will be leaving the service).

Some highlights of what’s new on Netflix in June include Hustle, Money Heist: Korea, Spiderhead, Peaky Blinders, The Umbrella Academy, Floor Is Lava and a new Bill Burr comedy special.

Better hurry though on some other titles, because despite all everything that’s new on Netflix in June, several shows and movies like Happy Gilmore, Forgetting Sarah Marshall, Silver Linings Playbook and Criminal Minds will be going to be going, going, gone in by the end of the month.

Check out the rest of what’s new on Netflix in June, as well as what’s leaving the service…

June TBA
Glamour Girls
Lunana: A Yak in the Classroom

June 30
Corpse Bride
Desperado
Eagle Eye
Escaping the NXIVM Cult: A Mother’s Fight to Save Her Daughter
The Exorcist
Forgetting Sarah Marshall
Godzilla
Happy Gilmore
Her
How to Train Your Dragon
Into the Wild
Joan Rivers: Don’t Start with Me
Just Go With It
Looper
Memoirs of a Geisha
Midnight in Paris
My Fair Lady
The Originals: Seasons 1-4
Shrek Forever After
Stand by Me