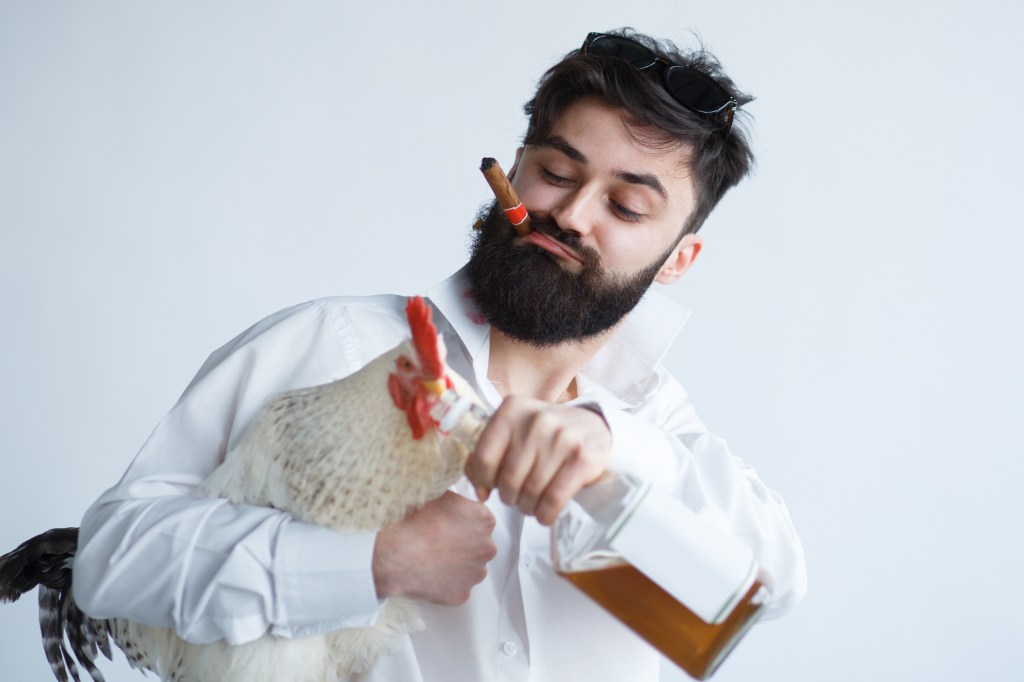 Muscle bound America would like the average putz to believe that the key to a long, healthy life – one that isn’t just a Rascal scooter ride from a dialysis machine at the local ICU – is to load up on protein, hit the gym for 16 hours a day, and make sure to take plenty of selfies for posterity. This meathead mentality often preaches the avoidance of alcohol while maintaining a strict regimen of anabolic steroids and generic Viagra.

Most health-conscious souls have dipped their toes into plenty of far-fetched fitness philosophies over the years – although admittedly, we’ve never heard of anyone taking boner pills before a workout — and found that they all pretty much suck a whole lot of dong.

A lot of people are now desperate for a solid piece of nutritional advice, one that still allows them to live while sacrificing only a smidgen of the food they usually eat. Well, boys, we might have just stumbled onto a diet made for legends. All you have to do is pick up the bottle and stop dining from chicken butts.

A couple of studies published this week in respected health publications show us that all we need to do to ensure a longer life is to keep boozing and get off eggs. No, not drugs, eggs.

The first study, published in Nutrition Journal, found that consuming alcohol might reduce the risk of cancer and cardiovascular disease. Researchers in China say they have discovered that moderate drinking might give people better chances of avoiding the wrath of these despicable maladies and move them comfortably into old age. To come to this conclusion, they studied nearly 84,000 healthy adults, asking about their boozing habits and referencing medical records to determine any cases of cancer and heart problems. In the end, they found the participants who drank on occasion (a couple of servings a week) were in better shape than those who didn’t.

The second study, this one in the journal PLOS Medicine, found evidence that eating eggs could drag us all to an early grave. For years, we’ve heard conflicting reports regarding the health benefits of eggs. One day they are suitable for us – chock full of protein – and the next, they are the worst food we could possibly put into our bodies.

Researchers from Zhejiang University say they are siding with the latter. Their study finds that eggs, specifically yolks, can bring about heart attacks, stroke, and cancer. In fact, for every half of an egg consumed, our risk of dropping dead increases by 7 percent, researchers said. “The increased mortality associated with egg consumption was largely influenced by cholesterol intake,” the study authors concluded.

As with any scientific paper that presents anecdotal evidence, it is always best not to get wrapped up in the results. Every time we turn around, science is uncovering new, disturbing reasons why we should stop eating and drinking everything.

There is no definitive magical diet that ensures a person’s chances of surviving cancer or a heart attack. There are just too many variables, like genetics and lifestyle factors, to make that determination.

However, most people with a semblance of common sense understand that trading breakfast for beer might not be the best approach to staying healthy. Even though we have certainly never turned down a breakfast beer.

Still, previous studies have found that no amount of alcohol is safe for consumption, and governmental recommendations really only allow us to have a handful of cocktails each week before we encounter problems.

As for eggs, well, they are high in protein and one of America’s favorite morning foods. You can’t go out for breakfast without eggs entering the equation, although a lot of people are moving away from them these days. Even heavy metal giant Rob Zombie credits a nasty plate of eggs for getting him to go full-blown vegan nearly a decade ago. In a recent interview with GQ, he said, “It was about nine years ago that I was eating eggs for breakfast. And I was just, like, “This is disgusting, and I’m done.” He now eats oatmeal, toast, fruit, and refrains from booze.