As President, I Would Make Breakfast Beer A Common Thing In America 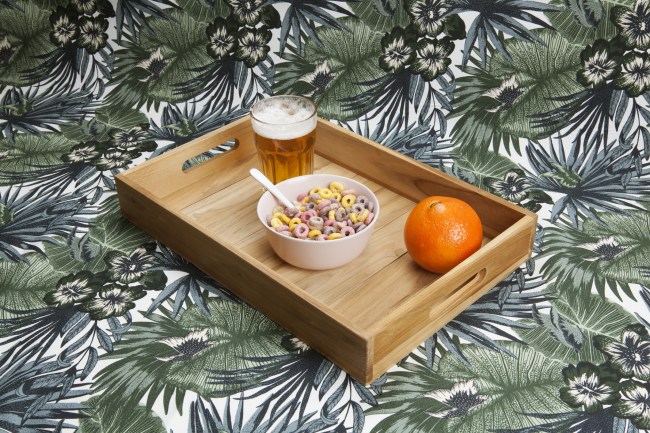 I’m not trying to become President of the United States or anything, but if I were, I’d come out of the gate with a radical platform that would surely buoy the broken spirits of the American people. And I’m here to tell you beautiful bastards, it would make the average voter forget all about those political ding-a-lings stinking it up on the campaign trail this year. For starters, I’d give everyone six months paid vacation — starting right fucking now.

I’d also eliminate those dreadful 8-hour workdays, the five-day work week, and I would see that all of you poor schlubs got a hefty raise and some nap time. Heck yeah! And then, just when the crowd really started to roar, I’d swoop in with the queen mother of new ideas and blow the pants off everyone else in the race. It would go something like: And my fellow Americans, as your president, I’d ensure that every man, woman and child never has to worry about waking up again without a breakfast beer. Not only would I propose making morning sips a way of life, but I’d also give y’all a tax break for it. Because, if there is one thing this country needs right now, it’s a beer buzz.

While introverted society has been known to knock back a beer or two in the wee hours of the morning to keep from completely losing their shit in airports and during those hellish holiday functions, breakfast beer is not something that most of us enjoy regularly. And that’s a damn shame, too, considering that there is arguably nothing quite as enjoyable as sucking down suds before the rest of the world crawls out of bed. Ah, yes, stepping outside with a cold one just as the sun starts creeping up from the east, listening to the crickets and shit, well, man, it just doesn’t get much better than that.

There’s no two ways about it, breakfast beer just feels better than the ones we would typically enjoy any other time of day, and it’s a sure-fire way to lift the morning funk that has most of us drooling all over the steering wheel on the way into work. I mean, come on, who wouldn’t be more productive if the boss was cool with us punching in with beer breath?

Listen, boys, I’m not farting around, breakfast beer is how we could actually make America great again.

I know what you’re thinking: “Come on, dude, having beer in the mornings is why God created the weekends.” Well, with all due respect, but fuck that noise. It’s 5o’clock somewhere, every day of the week, goddamnit! And, believe it or not, catching a morning buzz was once part of American culture before the roughnecks ruined it. It’s true, there was once a time in the United States — we’re talking 19th century — when it was perfectly acceptable for workers to start drinking before noon. It was a bastardized tradition that the U.S. stole from the English known as “elevenses,” and it allowed workers the right to get a little bit of the old bracer in them before the sun started flying too high in the sky. So while the English were over there sipping on tea and eating biscuits at 11am as part of their “elevenses” ritual, our boys were getting hammered.

As crazy as it sounds, breakfast booze was once hugely popular in this country. And it was one of the only perks of full-time employment. In fact, companies were expected to provide their employees with enough alcohol (usually whiskey) to last them from the early morning hours until the end of their shift. We shit you not. And hey, it was the least they could do since it was customary at the time for men to slave it out for 12 or more hours a day, seven days a fucking week.

Sweet Jesus, can you imagine? To top it off, there was no vacation time, no sick leave and the pay, well, to say it sucked ass would be an understatement. The average worker back then was only making around $400 to $500 a year. So, it is conceivable that many of these dudes were hitting the bottle long before they ever got to the job site. And who could blame them? Those were some dark ass days.

It wasn’t until the bosses noticed that a drunken workforce wasn’t exactly conducive to productivity that they began reconsidering the concept of the morning booze break. Many companies had no choice but to go dry. City leaders and even the public often complained that liquored up workers were on the streets fighting and loving up prostitutes once they clocked out for the night. Where they got the energy to rape and pillage like syphilis infected Vikings, well, that remains a mystery. All we know is eventually, the working class morning booze tradition was put to an end and replaced with, you guessed it, coffee.

Yep, it seems the black and white days of the whiskey workforce are mostly to blame for why it is so challenging to get the concept of the breakfast beer off the ground. Still, other countries have found a way to make it work.

The Germans, God bless ‘em, continue to enjoy a morning tradition known as frühschoppen, which means something to the effect of, “Fuck that coffee shit, we’re having a pint or two, you ninnies.” Sure, they still eat regular breakfast foods and all of that during this time of day, only they chase it down with a specific brew called hefeweizen. Unlike America, where drinking in the mornings might be considered one of the first signs of alcoholism, the Germans think beer is part of a balanced diet. They’re not at all sober curious and the only twelve steps they are taking is toward the nearest tavern. Furthermore, the Germans are not over there sucking on bottles of non-alcoholic beer in pursuit of health and longevity. To these cats, beer is what keeps them fit as a fiddle and contributes to their overall happiness. And, if you ask me, the U.S. should take note of their genius. Come on, boys, let’s make the breakfast beer the new American way.