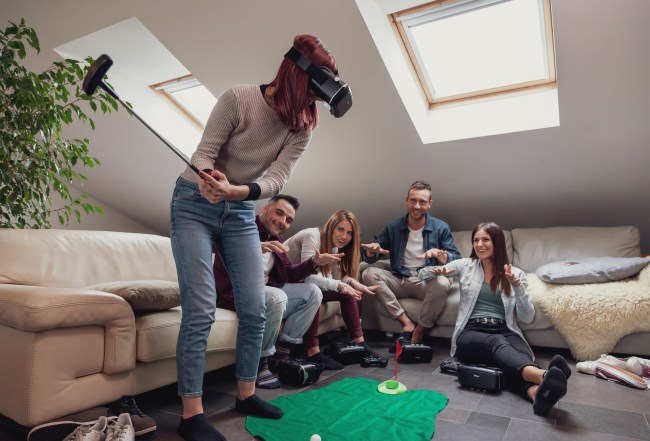 Author’s note: the above photo is not even in the realm of the right “golf simulator.” But that’s about the closest thing that istockphoto has. Plus, that cartoonishly huge backswing made me laugh. Her friends are about to die and they seem excited. Work with it.

We’ve all heard nightmare stories about COVID disruptions to daily life. But this story might take the cake:

Matt Reasinger was teed off. The 27-year-old occupational therapist with a 95 handicap had reserved the golf simulator in his luxury Upper West Side rental building’s multi-purpose amenity space for 8 p.m. during a weekday in early November.

But when he walked into the room, clubs in tow, a man in his 30s stood in front of the simulator swinging away. Five minutes later, yet another resident walked in toting his clubs and declared that the 8 p.m. slot was, in fact, his.

“Apparently all three of us of had booked the same time,” said Reasinger. Ultimately, I ended up waiting until the other guys were done before I got my chance.

Golf simulators aren’t great. If I were forced to “play golf” using a golf simulator, I’d probably quit. I don’t mean to sound like a snob—some people don’t have another option. But comparing outdoor golf on a real golf course to playing Pebble Beach on a golf simulator is like skiing at Vail versus putting on your ski boots in your bathroom and bending your knees a few times. I’d rather just use the bathroom for its intended purpose.

The only thing worse than playing golf on a golf simulator? Having to wait to play golf on a golf simulator. Dear GOD, that’s the universe telling you to sell your clubs buddy. I’m sincerely hoping the New York Post simply has no idea how handicaps work, but if you’re genuinely a 95 handicap, you should quit regardless. I’ve never even heard of such a thing. Didn’t know the system went that high.

Either way, our boy Matt sounds like a good fellow, considering he deferred to the two other guys who bumped him. So Matt, if you’re reading this, my promise to you: join me for an outdoor round at my REAL golf course next spring. My treat. Provided you get that handicap down below 15.