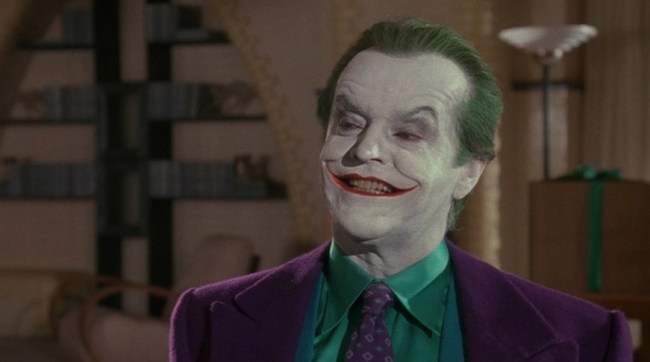 Jack Nicholson’s 1989 portrayal of The Joker has been voted the best-ever film version of a comic book villain, according to a new survey. He narrowly beat out Heath Ledger’s acclaimed 2008 depiction of the same character to claim the top spot.

Nicholson’s twisted turn as Batman’s infamous nemesis was selected number one by 23 percent of those polled, just ahead of Heath Ledger’s performance in Christopher Nolan’s The Dark Knight. Danny DeVito’s demented rendition of The Penguin in 1992’s Batman Returns came third place in the poll of 2,000 people.

Back in 2008, the New York Daily News reported that Nicholson had spoken to Ledger and cautioned the actor about the role.

Jack Nicholson, who played the Joker in 1989 – and who was furious he wasn’t consulted about the creepy role – offered a cryptic comment when told Ledger was dead.

Greg Tatton-Brown from online casino Casumo.com, who commissioned the study, said: “It seems the Batman series is best when it comes to memorable villains. And it’s little wonder, when you have performances as iconic as those of Jack Nicholson and Heath Ledger, which have gone down in cinema history. Heath Ledger’s tragic death in 2008 – the same year his Joker appeared in The Dark Knight – has cemented his place in comic book villain lore.”

In the same survey conducted through OnePoll.com, the overwhelming majority also voted for the worst ever comic-to-screen baddie.

That dubious honour went to Arnold Schwarzenegger for his appearance as Mr. Freeze in 1997’s Batman & Robin. His performance was littered with cheesy ice-based catchphrases like “Allow me to break the ice” and “Chill out!”

One in three polled think a truly great comic-movie bad guy has to be sympathetic, making you almost want to root for them despite their evil deeds. A quarter of those polled think a chilling evil laugh is the most important way to make your mark as a top screen villain.

Three times as many people find comic book movies’ bad guys to be more interesting than the heroes of the film. Some of the top reasons for this include the fact they say and do things that most people never would, they have interesting back stories and are totally unafraid to break the rules.

Four in 10 believe there are too many superhero movies being released at the moment, and on average they’ve seen a whopping nine per person.

Casumo.com’s spokesman said, “From the pages of one of the most iconic comic book series ever, to the big screen across eras of excellent actors and portrayals, the Joker is the ultimate villain. We want to celebrate the legacy of the Joker and encourage the mischievous joker spirit in all of us, though we’d like to stop short of any crime sprees or evil-doing.” Casumo.com has released a brand new game, Joker Strike, exclusively available until the 10th of April.