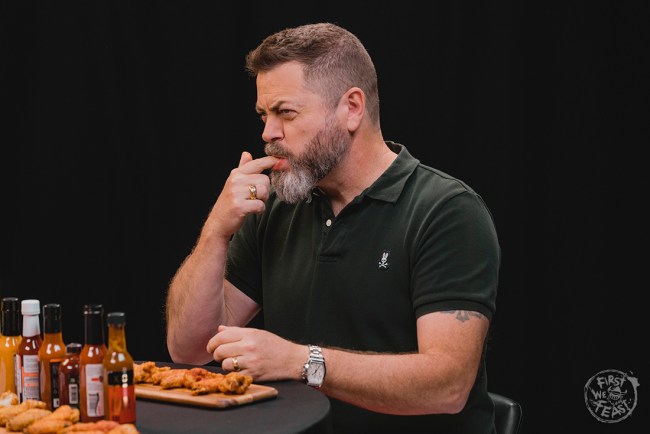 Nick Offerman was the latest guest on Hot Ones with Sean Evans. He kicks it off by saying he’s not the type of person who actively seeks out extreme heat which was the first red flag indicating that Offerman was about to get blindsided by Da Bomb Sauce. But everyone gets trucked by that particular sauce so Nick offerman wasn’t alone there.

I’m sure you already know the YouTube show where athletes, rappers, artists, and celebrities come on to take the ‘Hot Ones Challenge‘ which involves eating 10 of the absolute spiciest wings on the planet. The spiciness increases with each wing. In some cases, the guest will eat fake/vegan wings and it’s always up to the guest to choose which liquid they have on hand in case of an emergency (water, milk, beer, etc) with the host Sean Evans following the guest’s lead on the type of wings + drink of choice.

Nick has become inextricably linked to his character Ron Swanson from Parks and Recreation. It’s unclear where the lines of Nick end and Ron beings, and vice versa. The real-life Nick Offerman has his own 11-year Lagavulin Islay Single Malt and a private woodshop at his house in L.A. stocked up with rare and expensive woods for building things like furniture.

There are countless Ron Swanson quotes floating around the Internet and on this episode of Hot Ones, Sean Evans asks Nick to explain those quotes as they actually relate to Nick Offerman the man. He also asks Nick to discuss his perceived masculinity and love of tools.

All things considered, this might be my favorite episode of Hot Ones yet:

Hearing that man laugh just never gets old. He comes off as a lumberjack who’s been living in the Alaskan wilderness for the past forty years but when you hear him laugh he sounds like a toddler who just saw his Mickey Mouse for the first time and cannot contain his excitement.

I take no pleasure in seeing Nick Offerman getting completely destroyed by Da Bomb Sauce but it’s part of the schtick. I’ve never watched an episode of this show where the guest didn’t get completely demolished by that sauce. There’s nothing pleasurable about it. Pure pain.