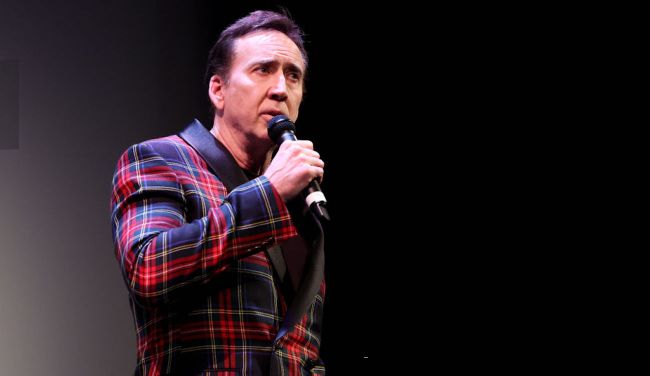 Having starred in over 100 feature films during the course of his decades-long career, legendary Academy Award-winning actor Nicolas Cage knows a thing or two about the rigors of making a movie.

Cage, of course, has made all sorts of movies during his storied Hollywood career: from actions to dramas, from comedies to indie films: he’s done it all. One of Cage’s experiences, though, stands out above the rest as being the most “demanding” movie he’s ever made.

During an interview with BroBible about his latest film The Unbearable Weight of Massive Talent,Cage digressed into his experience of working with Charlie Kaufman on Adaptation, which Cage considers to be the most “demanding” movie he’s ever made.

“The idea of playing some version of oneself with one’s own name in a movie is terrifying and daunting and that was brand new. I had never done that before,” Cage told our Post-Credit Podcast about making The Unbearable Weight of Massive Talent.

“But the whole time, I was trying to facilitate [director] Tom Gormican’s version of so-called Nic Cage and also protect so-called Nic Cage because it had my name. I couldn’t hide behind a character. The similarity, I would say that I had done before was ‘Adaptation’. I was playing the twins un Charlie and Donald Kaufman, but that movie was the most demanding movie I’ve ever made, it was more dialogue than I’ve ever had before. And to go back and forth each day from Charlie to Donald was acrobatic, and I don’t know that I could do it again.”

Cage’s latest film, The Unbearable Weight of Massive Talent, is currently playing in theaters. The Oscar winner also has two more films set to release this year, both of which are Westerns: The Old Way and Butcher’s Crossing. Then, in 2023, Cage will star as the iconic Count Dracula alongside Nicholas Hoult, Awkwafina, and Ben Schwartz in Universal’s Renfield.

INTERVIEW: Inside Pedro Pascal’s Rise To Being Hollywood’s Most Likable Movie Star