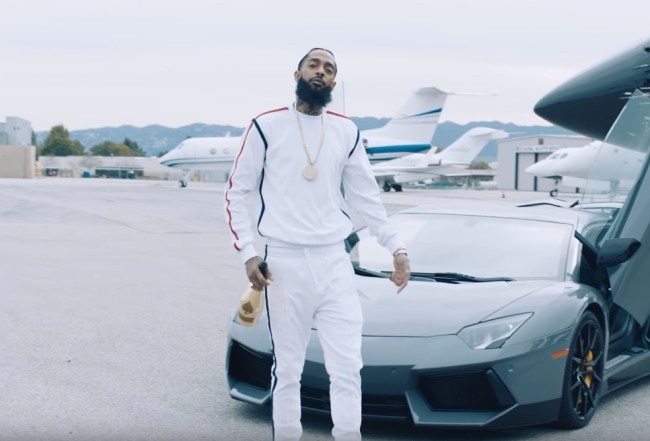 The hip-hop world was rocked on Sunday night when news broke of Nipsey Hussle’s death. The rapper was shot six times outside of his store Marathon Clothing Company in the Hyde Park neighborhood in Los Angeles. Nipsey Hussle, whose real name Ermias Asghedom, was only 33-years-old.

Nipsey Hussle’s final tweet before he died said: “Having strong enemies is a blessing.”

Having strong enemies is a blessing.

Fuck. My whole energy is just at a low right now hearing this. We just linked for the first time in years and said we were gonna do a new song this summer cause it had been too long. You were having the best run and I was so happy watching from distance fam nobody ever talks down on your name you were a real one to your people and to the rest of us. I’m only doing this here cause I want the world to know I saw you as a man of respect and a don. Rest easy my g.

Broke me…. we really fighting for our lives against our own kind and really have to take risk and match the level of hatred that we are born in .. I’m tired 🙏🏾 prayers for my brother and his family

RIP Nipsey man. This is tragic

This doesn’t make any sense! My spirit is shaken by this! Dear God may His spirit Rest In Peace and May You grant divine comfort to all his loved ones! 💔🙏🏿
I’m so sorry this happened to you @nipseyhussle pic.twitter.com/rKZ2agxm2a

You were about something..positive and for your community in every chance you had to speak..and because of that You inspired millions..millions who will uphold your legacy forever. rest amongst the stars. 🙏🏾 https://t.co/7gZ795wcQT

May God have mercy on your soul and bring peace to your family and friends.

You ARE a light and an inspiration to us all. And we gonna keep running this marathon. That yellow tape ain’t the finish line it’s the beginning of the victory lap. Legacy.

Real one after real one smh R.I.P Nipsey the solid morals you stood on and your legacy will last 4L!!

MY HEART GOES OUT TO NIP N HIS FAM MAN , THIS MAN WAS ON THE RIGHT PATH AND DOING BETTER IN LIFE , N NIGGAS DO THIS EVIL SHIT, THIS GAME IS SO SHADY ITS DISGUSTING, RIP TO ONE OF THE ONLY REAL ONES LEFT @NipseyHussle 🙏🏽 SLEEP IN PEACE KING

Me Spitta and Nip was all sleepin on couches when we linked up. This shit got me super sad.

What a damn tragedy. We have lost another brilliant black man to senseless gun violence. One of my favorite things in the world to do was tell people how much they were sleeping on Nipsey Hussle. He has inspired me so much as an artist. Salute young Nip. RIP. 🙏🏾

Wow, nipsey was genuinely one of the realist niggas in the game. Smh rip. 🙏🏾

THANK YOU FOR MOTIVATING ME.

I’m truly hurt this was one of the good guys ! Sending blessings and love to his family 🙏🏽

Nipsey was so important to the movement, I’m so sad

This man was on the grind for years, finally achieves a high level of success he was working towards, and a coward murders him in cold blood.

COME ON MAN SMH, Rip the fucking goat Nipsey bro.. If you never listened to his music I advise you play all throughout his music and get in tuned and listen to what we just loss today.

This is tragic and unthinkable news. No one was loved in this city more than Nip. RIP to one of the realest ones ever. https://t.co/QIHchbowlP

Rest In Peace Nipsey Hussle. A prayer for his loved ones.