We’ve Got A Nordic Skiing Fight Of The Year Candidate! 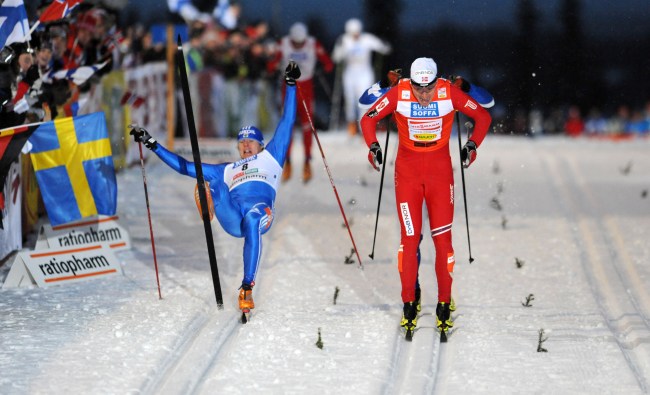 (That picture has nothing to do with the fight. Watch the fight below.)

Wow. WOW. Shocking stuff from the groomed tracks of Lahti, Finland. I hate to call it prematurely, but it’s going to be hard for any cross-country skiing fights to top this one. After all, when you Google “cross-country skiing fight,” this is the only one that comes up. Might be the only nordic skiing fight ever. And to see it at the finish line, no less? These are the same people who routinely cross the finish line looking like the hardest hit guests on Hot Ones—snot STREAMING out of their face, forming icicle beards down their chins, disgusting. They can barely stand, let alone fight! I guess that’s the Russian difference.

If you’ve never held a x-country ski pole, it’s a twig. Legitimately the lightest ski pole of all the ski poles. Like a chute of bamboo. The skis are also a joke: thin twigs that slip and slide, very narrow, fit easily into your car. Completely unlike loading up the car after a long day of downhill skiing. It’s like gathering up tent equipment. That’s why that “tackle” (it’s a body check, let’s be real) was so preposterously funny. You can hear all the gear smacking and clacking together. Nobody is going to be hurt because, for one, these guys are like 4% bodyfat and weigh NOTHING. Add to that the fact that their poles and skis are basically made of styrofoam and this “tackle” looks a lot more like a pillow fight.

Of course the Norwegian guy just smiled, unclipped his skis, and stood up like a baby deer. Easy to take the high road when you’ve won the race and your country has the fourth best healthcare in the world. Nobody talking to each other. Classic cross-country skiing non-confrontational dustup.

Last question: are you not supposed to veer in to the path of the guy chasing you? Does Nordic ski etiquette differ from cycling etiquette? You’d think it would be perfectly fine for the Norwegian guy to cut off his challenger. Seems like the point. I hardly think he deserves to get tattooed across the back with a pole shaft. Especially in cold weather? That’ll sting.