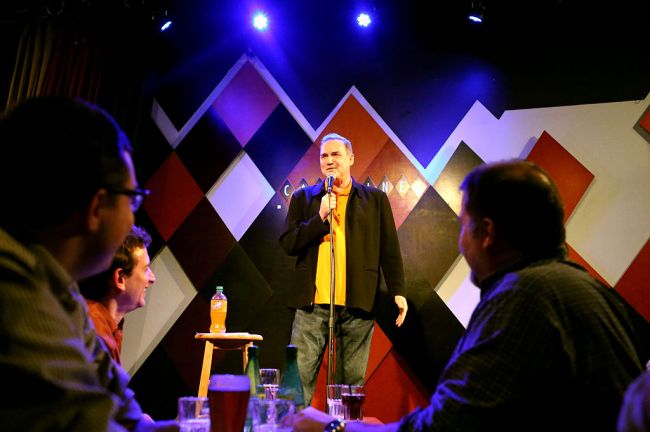 Once a week, the YouTube algorithm will feed me video titled something like ‘[Insert Comedian] Ruthlessly DESTROYS Obnoxious Heckler” and I watch them every single time.

I am rewarded with a dopamine spike witnessing an unruly human suffer immediate consequences for breaking society’s unwritten rules of civility.

Leave it to the beautifully unpredictable mind of Norm MacDonald to forgo the sweet nectars of YouTube monetization to handle a heckler at his show in the most graceful, empathetic way possible.

A former comedy club drink server shared a story about Norm’s handling with an unruly patron during a show in Irvine, California in 2017. It is well worth a read.

I want to share an unknown story about Norm that shows his humanity.

In 2017, Norm did a show in Irvine, California. I was there working the show as a drink server. About 5 minutes into the show, a heckler (and a mean heckler…one that really seemed hateful of Norm), started verbally ruining his set. Security was about to remove him, but then Norm stopped security saying he wanted to talk to the heckler. The audience started clapping thinking Norm was going to verbally destroy him. Instead, Norm tried to figure out why he has paid admission to be so hateful. The audience laughed more thinking Norm was setting something up, or mocking the man, but Norm quite seriously hushed the crowd. Somehow, over the course of about 5 minutes, Norm actually defused the guy, who ended up admitting he was lonely because his girlfriend had left him 3 weeks before, and had been angry at the world ever since. It actually became a sincere, deep, vulnerable conversation, and more and more of the crowd realized Norm wasn’t setting him up. Norm got the man to agree to stop heckling and said he wanted to meet him after the show. He got security to let him stay, and the show went on.

After the show, Norm had a meet and greet, and a few people lingered curious what would happen between Norm and the heckler that Norm was requesting to stay. Instead, Norm completed the meet and greet, and then asked us to shoo everyone out except for the heckler. After everyone had left (other than me and 2 other staff, and 2 security guards), Norm asked the guy what he was doing the next hour or so. The guy said nothing, and then Norm asked if he wanted to go have dinner. And Norm asked us if the grille would serve a meal to them between sets, which they did.

For the next 45 minutes, Norm had dinner in our club with the guy who an hour before was trying to ruin his set. We gave them distance so I can’t tell you what was said, but I can tell you at one point the man was crying. I can also tell you at the end of the meal, Norm shook his hand and put his arm kindly around his shoulder in sort of a half hug, before the man left.

Later that night, Norm had to cancel his meet and greet at the end of the show, because he “wasn’t feeling well”. And Norm looked rather sick the whole night too. In retrospect, I wonder if the “wasn’t feel well” was related to cancer or its treatments.

I also wonder if Norm was trying to impart wisdom about his own past hatred onto the man, and how to transcend it. I thought people should know this story because it’s true and it happened in 2017 at a show in Irvine, CA.

There are very few comedians I can picture buying dinner for someone who attempted to mess with their livelihoods. And the few who I can, would probably take a photo with the dude and post it on their socials for clout. That wasn’t Norm. The dude didn’t even tell us he was dying for a decade. WE WOULD’VE GIVEN YOU A FAREWELL TOUR, NORM.

Here is another instance of Norm treating a heckler like a peach.