Why Does Your Nose Run When It’s Cold Outside? Here’s The Scientific Reason 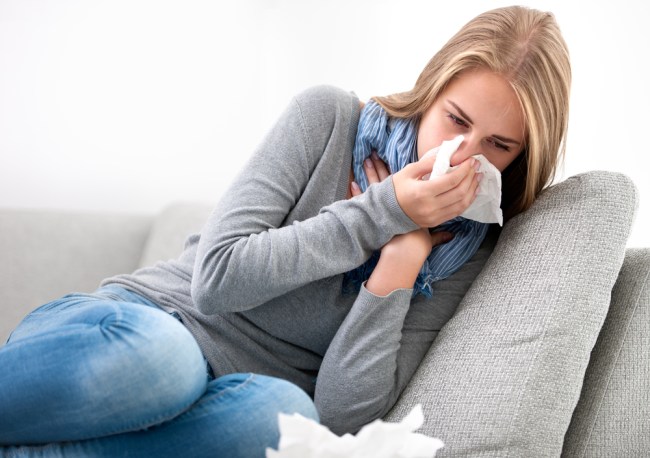 Right now more than half of the country is being walloped by cold weather and that means that noses are running. While there’s no rock-solid method of preventing runny noses because of the frigid weather besides moving south or staying indoors, you can learn some things to decrease the runaway snot and find out the scientific reason as to why your nose runs when it’s cold outside.

First off did you know that there’s a technical term for runny noses? The condition of having a significant amount of mucous is called “rhinorrhea” or “cold-induced rhinitis.” You may hypothesize that your nose wouldn’t run when its cold, especially when it’s below freezing because the cold temperatures may decrease the motion of molecules in the mucus. But that’s not how this works.

Your nose is already warm and humid. That is because one of the nose’s jobs is to warm and humidify the air that we breathe so that when it reaches your lungs, it’s the perfect temperature and humidity and doesn’t irritate the cells. To do this the nose adds moisture to the air and in the cold winter, the air is very dry and it forces the liquid production to work overtime.

When you inhale cold, dry winter air, the tissues inside the nose automatically increases mucus production to protect sensitive lung tissue. The cold air stimulates cells of your immune system in your nose called “mast cells.” These mast cells increase production of more liquid in your nose to make the air moister. While combating all of the cold air the nasal cavity can create too much fluid and the excess drips out of your nose. Plus, cold air stimulates the nerves inside your nose and your brain reacts by increasing the blood flow to the nose, and the dilated blood vessels warm the air passing over them.

The other factor is that the winter air can be cold and dry, that is why when you are outside and temperatures are low you can see your breath in the air. The moisture from your lungs condenses in the cold air and you can actually see the droplets of liquid in the air. The small water droplets you breathe out you also breathe in and they join together on the tip of your nasal cavity, combining with the fluid already inside of your nose, causing you to have too much liquid, and it pours out of your nose. “When inhaling air through the nose at subfreezing temperatures, the air in the back of the nose is usually about 26°C (78.8˚F), but can be as high as 30°C (86˚F),” CNN reports. “And the humidity of air at the back of the nose is usually around 100%, irrespective of how cold the air is we’re breathing in.”

When you’re sick from the cold or the flu your nose runs because it is attempting to flush out the nasal cavity with fluid that is designed to fight off and wash away the germs. To cut down the risk of a runny nose you can cover your nose and mouth with a scarf. The air you breathe in through the fabric will be warmer and moister, which will decrease your runny nose. If you suffer from extreme snot gushing down your face that is chasing all of your dates away you can try anti-inflammatory nasal sprays such as Atropine and Ipratropium.