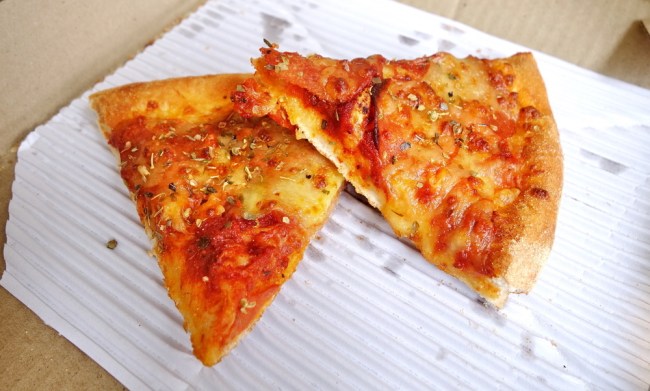 If you’ve ever stumbled out of bed with a hangover that gives you the urge to build a time machine so you have the ability to track down and kill the first person who discovered alcohol, then I don’t have to tell you what a godsend it can be to discover food you forgot you ordered before you went to sleep waiting for you on the table when you wake up. Who needs Gatorade when you can wash down two pieces of pizza with half a can of warm beer instead?

You might not necessarily be proud of your breakfast of choice, but according to one nutritionist, you could actually be doing a lot worse for yourself (aside from the whole “chugging flat beer” thing). I’ve always joked that pizza is a well-rounded meal considering all of the food groups it covers, but Chelsey Amer recently chatted with The Daily Meal and said there might actualy be some truth to the reasoning many people use to tell themselves they’re being healthy.

If you happen to be friends with anyone who’s decided to pursue their dreams of becoming an Influencer by constantly posting meal plans and fitness pics on an Instagram account with 93 followers, you know there are plenty of healthier breakfast options than pizza, but Amer says its a better better alternative the most popular morning meal in America: cereal.

She went on to explain her reasoning, saying:

“You may be surprised to find out that an average slice of pizza and a bowl of cereal with whole milk contain nearly the same amount of calories. However, pizza packs a much larger protein punch, which will keep you full and boost satiety throughout the morning.”

Who would have guessed those 2 AM Domino’s orders might have actually been a good idea all along?