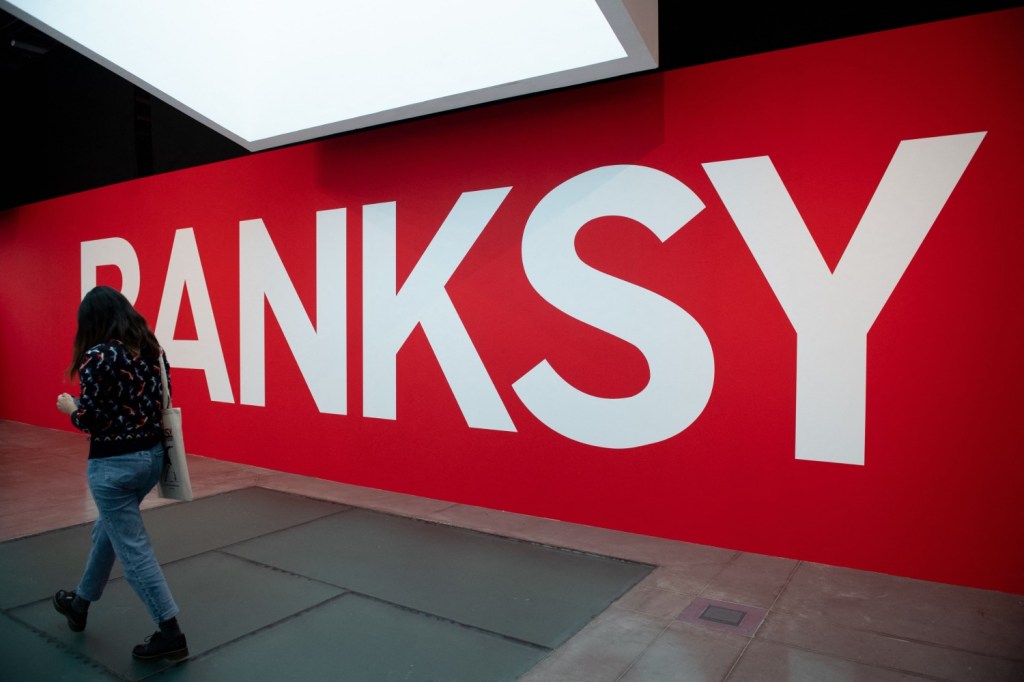 A woman in NYC named Colleen has gone viral on TikTok sharing her story of buying potentially authentic (and valuable) Banksy art in an uptown subway station. Now, let’s get a few things out of the way real quick: (1) she isn’t claiming this is real, (2) it wasn’t a ‘secret gallery’ as the art was displayed out in the open, and (3) she isn’t a TikTok’er, she just happens to have gone viral on TikTok.

Now that we’ve gotten that out of the way let’s discuss what’s going on here. In her initial video, she shares about how she was headed home and saw the art and kept going but couldn’t stop thinking about it so she went and got some money, and went back to buy some art.

The person selling the art was wearing a ski mask which is an important detail here as Banksy has remained faceless for all of these years. And he was apparently only accepting BTC as currency (until he took cash) which is another hallmark of Bansky’s.

Her initial video has nearly 4 million views. She’s since uploaded a ton of videos about the saga as people online have questioned the authenticity, asked her questions about the pieces, and articles have been written about it. Here’s her first video with some more information and additional clips below

Maybe I fell for an elaborate tourist trap, or maybe I made the best decision of my life #banksy #art

Another very important detail here is this isn’t without precedent. When Banksy did a month-long residency in NYC back in 2013 someone purchased authentic Banksy art at a street vendor table in Central Park near The Met. They paid just $60 for that art while the rest of New York was chasing his daily art drops all over the Lower East Side.

Her TikTok mentions have been blowing up since the first video. People have asked if they are signed. They are not. Here she explains that one of the pieces is stamped with ‘Unauthorized’ which is part of his upcoming exhibit.

Here’s what that subway art sale looked like but without the plastic on the ground:

Here she describes what she saw:

#greenscreen Banksy? This was exactly what it looked like- this was it. No cops or plastic though. #banksy #art #nyc

There was an interesting moment on Antiques Roadshow a little while back where a British person tried to sell an unauthenticated piece of Bansky art they’d stolen in Brighton. That person found out their art was basically ‘worthless’ on the secondary market since it wasn’t authenticated.

Banksy’s ‘Love Is in the Bin’ (2018) previously sold for $25.4 million. People pay A LOT of money for authentic Banksy art. But that’s not what is happening here at all. She’s clearly a big fan of Bansky’s pieces and is gobsmacked by the possibility that she stumbled past a Banksy art sale in a subway and is elated to own the pieces. People asking about authentication seem to forget that the majority of people buy art because they enjoy the pieces, not because they can flip it for more money.

Here she dives deeper into the story in seven parts…

Banksy? Final part! #banksy #art if these are fake, no they aren’t. Because the experience was real.

Here’s what I picked! #banksy #art

I’ll give my thoughts on this even though they don’t matter at all. After watching all of these videos, I do think she purchased genuine Banksy art and happened to be in the right place at the right time.

My initial reaction to seeing all of this news was it felt too manufactured. I got the sense that it was viral marketing to drum up discussion about his ‘Banksy Expo: Genius or Vandal?’ exhibit in NYC. And I’ve come to accept that can be true while her story is also 100% authentic. I imagine if her story didn’t go viral they (Banksy + his team) would’ve done this again in another subway station until they got the press they were looking for and people like myself wound up writing about it.

And to that point, something similar to this sale had happened recently in Union Square. Nobody knows if this was a fraudulent sale, viral marketing, but pictures have circulated of this similar sale in NYC over the past few weeks:

Union Square this afternoon. A dude selling Banksy paintings. It’s not him as I know what Banksy looks like. But I wonder if he’s selling them for Banksy, he done this before in NYC. Or if it’s a chancer making some cash. I wonder #banksy pic.twitter.com/RqCu0dDlyR

There seems to be a large portion of people following this story obsessed with finding out whether or not the art is legit. If I was in her shoes, I’m not sure I’d care. In fact, not knowing is probably better because you can choose to believe it’s legitimate and just enjoy your art instead of thinking about its value and what someone might pay you for it.