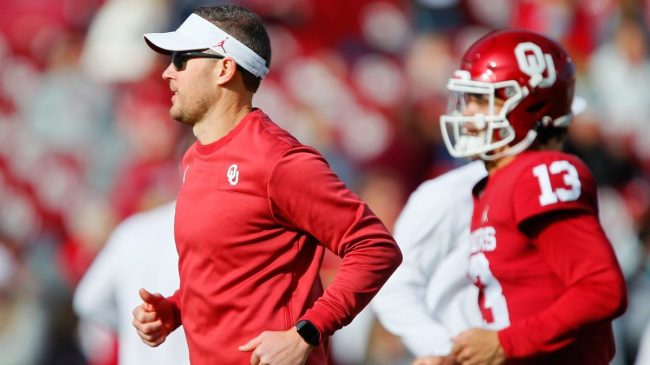 The honeymoon period for Brent Venables at Oklahoma is over.

The Sooners dropped out of the Top 10 in both polls last week after a loss to Kansas State. Now it appears they’re going to drop even further this week.

Oklahoma trailed Big 12 foe TCU 20-3 just 10 minutes into their game in Fort Worth on Saturday after a long run by Horned Frogs QB Max Duggan.

TCU off to the dream start over Oklahoma 👀pic.twitter.com/NgN25jbGwl

The Sooners look well on their way to their second straight loss in Big Ten play and with the Red Red Rivalry against Texas ahead of them, things are looking rough. Particularly with the looming return of Texas’ rising star QB, Quinn Ewers.

That combination is leading some to call for Venables to be fired already and for the return of former head coach Lincoln Riley. Riley, of course, left Norman to take the head coaching job at USC in the offseason. He also took star quarterback Caleb Williams and a number of offensive weapons with him.

🚨MELTDOWN ALERT 🚨
Three plays in and #Oklahoma fans had given up. pic.twitter.com/mkfXpCPCnS

Sooners fans were particularly harsh on Williams’ replacement, Dillon Gabriel. Gabriel transferred to Oklahoma from Central Florida in the offseason. Gabriel had initially committed to Ole Miss, but followed offensive coordinator Jeffy Lebby out the door to Oklahoma.

One fan even oddly called for the Sooners to hire South Carolina head coach Shane Beamer, who has had his own struggles with the Gamecocks in Columbia.

Many college football fans expected Oklahoma to take a step back without Riley and Williams. But not many thought that it could possibly get this bad, this quickly.