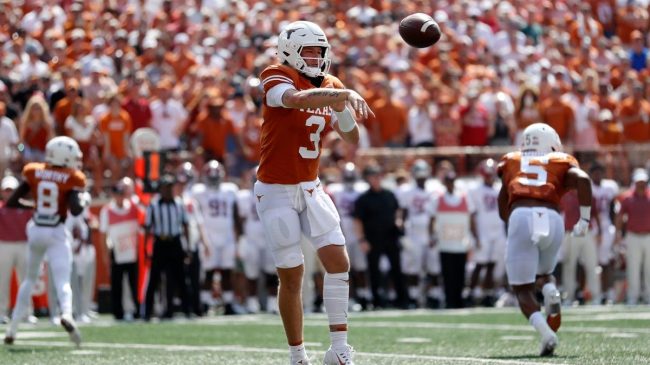 Ewers took a circuitous route back to the Longhorns via the Ohio State Buckeyes and won the starting QB job over Hudson Card in the offseason. He then stole the show in limited action against the Alabama Crimson Tide. But a hit that some Texas fans are calling dirty caused Ewers to suffer a severe sprain of his SC joint near his clavicle.

He’s since missed 2.5 games for the Longhorns, two of which Texas has lost. Steve Sarkisian and the Longhorns hoped to have Ewers back for Saturday’s game against West Virginia.

But now it appears that won’t be the case.

Texas did, however, receive some clarity about when their star signal caller will return.

Pete Thamel of ESPN reports that Ewers is focusing on a return for the Longhorns’ biggest game of the year. That comes next Saturday when Texas squares off with rival Oklahoma in the Red River Shootout.

Ewers has dressed for the Longhorns’ past two games but is not expected to play against West Virginia on Saturday, sources said, as the quarterback continues to follow the original four-to-six-week timeline that emerged after he was injured in the first quarter against Alabama on Sept. 10. Ewers has been limited in practice this week, sources said.

A return against the Sooners would mark four weeks after Ewers was injured, with sources indicating that is the earliest he would be expected to be available to play.

Ewers is the future of the Texas program. So it makes sense that the Longhorns are being careful with his health. Though some fans seem to believe there are more cards in play.

Quinn Ewers' parents are calling the shots down in #Texas. #HookEm pic.twitter.com/0qyowtM5Ik

Texas may or may not be back. But the Longhorns are endlessly entertaining either way.