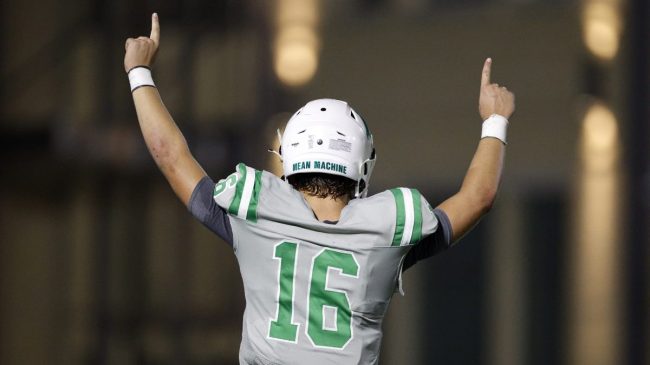 Arch Manning looks like the great in a long line of great quarterbacks from the Manning family. The Louisiana native is a five-star prospect that’s ranked as the consensus No. 1 overall player in the 2023 recruiting class.

Manning made huge waves when he announced his commitment to the University of Texas over the summer. But landing Manning didn’t come without the Longhorns first spending a pretty penny to do so.

The early returning on Manning’s senior season has proven that he may well be worth every one of pennies. The star signal caller broke a pair of state records on Friday that were previously held by his famous uncles – Peyton and Eli.

Eli threw for 7.268 yards. While Peyton threw for 93 touchdowns. Arch, the prince that was promised, has now eclipsed both. But Eli is throwing a flag on the play.

The game of football has changed drastically since Eli Manning left high school in 1999. Teams are throwing the ball far more and playing from the shotgun formation far more.

This led Eli to call for a review of his nephew’s newly-set records.

But how many of those passing yards did he throw from under center? I had 7,000! https://t.co/6xS0pUiwRE

From the sounds it, all of Eli’s passing yards came while playing under center. Arch, meanwhile, spends almost all of his time in the shotgun. Doesn’t seem fair to us!

Between showing off his outfit on the streets of New York and crashing Penn State tryouts, Eli has been a busy man of late. But thanks to his latest gripe, Thanksgiving at the Manning residence could end up pretty awkward.